He said that it is possible only in the BJP that a person like Nadda can become the party president. 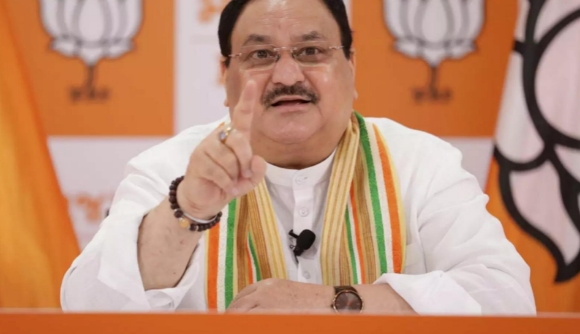 Meerut: BJP National President J P Nadda on Saturday hit out at the opposition, saying that BJP is concerned for the development of sugarcane farmers but others are just interested in promoting Jinnah.

He said Mayawati-Akhilesh sold sugar mills and closed it but on the other hand Yogi Adityanath has restarted them.

“When corona came, the parties were quarantined, but BJP workers went out and continued to deliver food to the needy. Medicines were delivered,” he said while addressing the BJP’s regional (West Zone) booth presidents convention here on Saturday, Nadda said the BJP workers had worked hard to send home the migrant workers who were forced to walk hundreds of kilometers to reach their homes during the lockdown.

He said that it is possible only in the BJP that a person like Nadda can become the party president.

“But in other parties the situation is different. A leader of a party is not ready to give anything even to his uncle. In other parties, only son, sister and father will get all the posts and the rest will clap for them. Other parties run along caste and religious lines and will give respect to Jinnah. Only BJP is trying to keep the country united,” Nadda added.

The BJP president said Modi ji saved the lives of 130 crore people. Earlier, vaccines used to reach India with a delay of 20 years, but Modi ji delivered the corona vaccine within 9 months. Those who call Modi Tika – BJP Tika (vaccine) are getting the same vaccine done, he said.

Nadda also slammed Samajwadi Party, saying,” these dynastic products sell the national interest for themselves and people have seen this. These people had given patronage to the terrorists too”.

He said to the people that this is not the new SP, it is the same SP, keep this in mind. Under them there were riots everywhere which was ended by CM Yogi.

BJP State President Swatantra Dev Singh said that today the booth president conference of West Zone is being organized whose basic mantra is winning the booth, then the election is automatically won.

Singh said that all political parties have their place. Other parties are just a political party but BJP is a party with a mission. Several other BJP leaders also addressed the meeting.