Erdogan and Zelenskyy also noted the work of the Special Monitoring Mission to Ukraine of the Organization for Security and Co-operation in Europe (OSCE SMM) and agreed to continue supporting its activities in Ukraine. 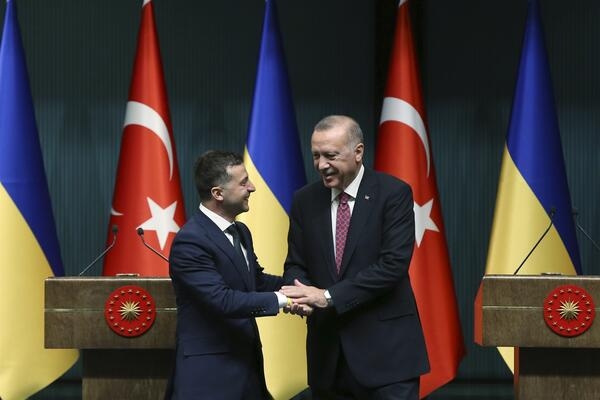 Moscow: Turkish President Recep Tayyip Erdogan and his Ukrainian counterpart Volodymyr Zelenskyy have held talks in Istanbul, agreeing to support the resolution of the conflict in southeastern Ukraine (Donbas) based on the Minsk peace agreements.

According to a joint declaration issued by the two leaders after their summit on Saturday, Kiev and Ankara have agreed to support peace efforts in the Donetsk and Luhansk regions through dialogue based on the Minsk II accords.

Erdogan and Zelenskyy also noted the work of the Special Monitoring Mission to Ukraine of the Organization for Security and Co-operation in Europe (OSCE SMM) and agreed to continue supporting its activities in Ukraine.

Speaking at a joint press conference after talks with Zelenskyy, Erdogan said that he had discussed the most recent escalation in Donbas and expressed the belief that the crisis could be resolved via political means. The Turkish leader voiced support for the Minsk accords.

Despite the Minsk peace agreements, ceasefire violations continue in southeastern Ukraine, where the Ukrainian military launched a special operation against the self-proclaimed Donetsk and Luhansk people’s republics (DPR and LPR) in 2014. According to UN data, about 13,000 people have fallen victim to the Donbas conflict.

Earlier this week, the first deputy head of the DPR ministry of information, Daniil Bessonov, said that Ukraine continued to pull military equipment to Donbas for a potential offensive it could launch in late April, as soon as weather conditions permit.

The Normandy Four format was established in June 2014 to mediate the conflict in southeastern Ukraine, after the regions of Donetsk and Luhansk, known together as Donbas, proclaimed independence following what they considered to be a coup in Kiev in February of that year.

In 2015, the Normandy Four negotiated the so-called Minsk II protocol which stipulated a ceasefire in Donbas and sought a long-term political resolution to the conflict. During a Normandy summit in Paris in late 2019, all sides agreed that the Minsk agreements remained the basis of Donbas conflict resolution.