While the committee for West Khasi Hills is headed by Public Health Engineering (PHE) minister Renikton L Tongkhar is scheduled to have its first sitting on October 14. 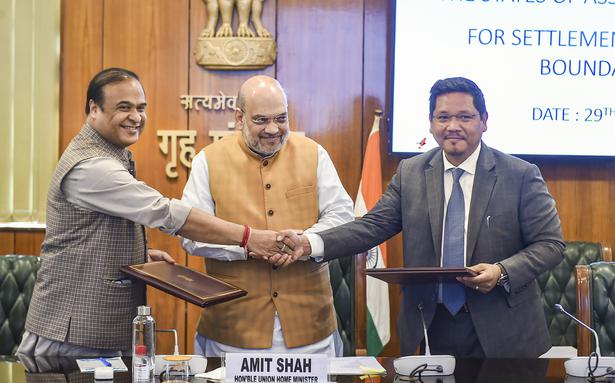 Shillong: One of the three Meghalaya government-appointed regional committees has started to hold official consultations to resolve the remaining six areas of the boundary dispute between Meghalaya and Assam.

The West Jaintia Hills regional panel headed by Urban Affairs Minister Sniawbhalang Dhar, together with Home Minister Lahkmen Rymbui held its first meeting on October 6 among its members to brainstorm on the task ahead.

While the committee for West Khasi Hills is headed by Public Health Engineering (PHE) minister Renikton L Tongkhar is scheduled to have its first sitting on October 14.

“We will have to collect data and information and this would take some time, but the process is on. The committees would ensure that the boundary dispute is resolved taking into consideration the concerns of the people living in these areas,” Rymbui said.

Rymbui said the regional committees would like to take everyone on board to resolve the dispute and the prime concern is to address the problems of the people living in these affected areas.

The Meghalaya government has notified three regional committees to resolve boundary disputes in six remaining ‘areas of differences’ with Assam.

Out of 12 ‘areas of differences’, Meghalaya Chief Minister Conrad Sangma and his Assam counterpart Himanta Biswa Sarma signed a Memorandum of Understanding (MoU) in the presence of Union Home Minister Amit Shah resolving the differences in a 36.79 sq km area comprising six (Tarabari, Gizang, Hahim, Boklapara, Khanapara-Pilangkata and Ratacherra) in the first phase.

The committees are mandated to coordinate with the relevant regional committee set up by the Assam government, establish the geographical location of the villages, their contiguity and examine the population including ethnicity.

The committees would visit each of the villages, and interact with the communities living in the villages including the elected representatives of the Autonomous District Councils and other stakeholders to learn about the perception of the people living in the area.

The committees would document the factual information regarding the physical and time-wise distances from the villages to the nearest public service delivery point administrative unit.

The committees will submit their report to the Meghalaya government within a period of 45 days from September 26, 2022.

Based on the inspection of the villages and agreed yardsticks of historical perspective, ethnicity of the local population, administrative convenience of local people, contiguity with the boundary and the perception of the people living in the area, the reports would be formulated and submitted.