The conflict started on 3 December 1971 and within 13 days, Pakistan was brought to its knees. It resulted in splitting our enemy into two halves and giving birth to the sovereign and proud nation of Bangladesh. 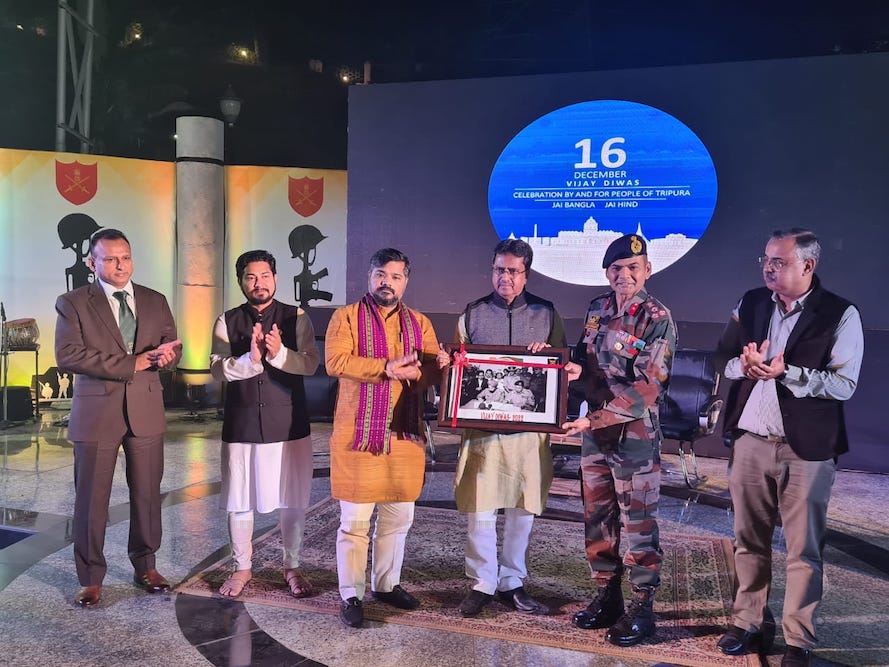 Imphal:  The 1971 war has its own special significance as it remains one of the shortest successful wars ever fought.

The conflict started on 3 December 1971 and within 13 days, Pakistan was brought to its knees. It resulted in splitting our enemy into two halves and giving birth to the sovereign and proud nation of Bangladesh.

During this operation, the Indian Armed Forces forced the surrender of 93,000 Pakistani troops. The operations ended on December 16, 1971, at Dhaka, after the unconditional surrender of the Pakistani forces. This historic day is celebrated every year as “Vijay Diwas” in India and “Bijoy Dibos” in Bangladesh.

To commemorate the bravery and sacrifice of those who participated in the 1971 War, a solemn Vijay Diwas function was organised at the Albert Ekka War Memorial, Lichu Bagan, by Red Shield Gunners.

The day commenced with a wreath-laying ceremony in honour of all those who made the supreme sacrifice for the nation during the 1971 war. Wreaths were laid by state Chief Minister Manik Saha, Station Commander, Agartala Military Station, Sector Commander of Assam Rifles, Chairman, Rajya Sainik Welfare Board, and veterans of the 1971 war.

Later, a cultural evening with patriotic fervour was conducted at the Albert Ekka War Memorial to commemorate the day.

The event was jointly organised by the Tripura government, the Assistant High Commission of Bangladesh in Agartala, and the Indian Army. The event was marked by the presence of the Chief Minister as the Chief Guest, Sushant Choudhary, Minister of Information and Cultural Affairs, Arif Mohammad, Assistant High Commissioner of Bangladesh, a number of senior officials from state administration, the Indian Army, Assam Rifles, BSF, and CRPF, war veterans of the 1971 war, and citizens of Tripura.

The event also witnessed the presence of a large number of schoolchildren and NCC cadets. Mesmerizing performances by local artists, cultural teams from Bangladesh, students of the Army Public School, Agartala, NCC Cadets, and India Army troops performing Bhangra made the evening memorable.

Chief Minister Manik Saha, during his address, remembered the 1971 war and the role played by the valiant people of Tripura during this war. He also praised the role of Mukti Jodhas, who fought alongside the Indian Armed Forces to achieve their dream of a free Bangladesh.

He further said that India and Bangladesh have a long and lasting friendship that has grown stronger with time. He also said that Bangladesh and Tripura are not only geographical neighbours but have deep historical and cultural ties, and these relations will only become stronger in the years to come.

During the program, the Chief Minister also felicitated 1971 war veterans in recognition of their invaluable service to the nation and schoolchildren who bagged prizes in a painting competition organised for children on December 11, 2022, to commemorate this historic day.