TMC of importing culture of violence and hatred from WB

Chief Minister warned the people against falling for the disinformation campaign of the oppositions especially the graft-accused and scamsters parties on Tripura outside. 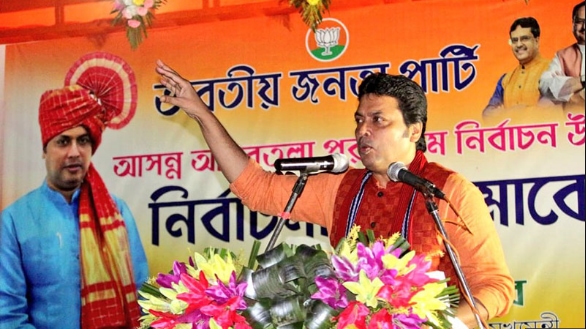 Chief Minister Biplab Kumar Deb alleged from the first day, TMC has been targeting goodwill and heritage. Tripura had always been hit the national headlines for wrong reasons due to three-decades-old insurgency and 25 yrs rule of communists. After the BJP-IPFT government came to power in 2018, Prime Minister Narendra Modi has undertaken extra effort to introduce Tripura before the nation for good performance and activities.

TMC has been instigating violence and persuading communal hatred by bringing people from West Bengal and a few local rejected political personalities for the last six months. They have been creating trouble for the local people with all false propaganda and defamatory statements against the ruling dispensation here, which people of Tripura do not like and would be reflected in EVMs during civic polls, he believed.

Counter the campaign of murdering democracy by his government in Tripura, Deb said people of West Bengal are realising the mistakes of bringing TMC in power. Hundreds of citizens of Bengal have been fleeing away from home after Mamata Banerjee became Chief Minister for the third time because they had supported BJP and expressed their affections to Prime Minister Modi.

“Murder, mayhem, ransacking of houses, openly threatening the people who don’t like TMC become a regular phenomenon today in West Bengal. No comprehensive plan for development. In fights among the communities, syndicate raj and family-driven politics are being practised in Bengal today and they are trying to infuse it here and extend their area of operations in Tripura, but people here don’t want them,” Deb alleged.

Highlighting the success of his government in three and half years, Chief Minister said the development of internet and digital activities, highways, airways and waterways has been going on under the direction of the Prime Minister. The government has widened the scope of self-employment and alternative livelihood, development of health and education infrastructure, and a massive plan of tourism development are underway, which will in a few years change the socio-economic landscape of Tripura.

“The long-cherished dream of SEZ has been set up in South Tripura to bring external investment. The road connectivity with Chittagong seaport to South East Asia will open up very soon. The farmers have been getting direct cash benefits of Rs 6000 every year. The FCI has been procuring paddy at a minimum support price from the farmers. An investment-friendly environment has been created to attract industries in such a short period,” Deb claimed.

He further alleged that TMC attempted to disturb all the development initiatives.

Chief Minister warned the people against falling for the disinformation campaign of the oppositions especially the graft-accused and scamsters parties on Tripura outside. He also accused a section of political and social activists of working on an orchestrated conspiracy to destabilize the state through disinformation campaigns in social media.

“The people infamous for their deep involvement in scams and defrauding people through chit funds are now on a new job to trigger tension in Tripura through social media posts that are totally and false, baseless and malicious,” Deb stated adding that the evil designs of the opposition to hurt the religious sentiment of the people should be befittingly rebuffed.