The Shillong Press Club (SPC) in an emergent Google meet convened on Tuesday night expressed “deep concern at the tone and tenor” of the HNLC (Hynniewtrep National Liberation Council) statement which squarely accused the press of not publishing the proscribed outfit’s bandh calls by obeying the order of the Meghalaya High Court. 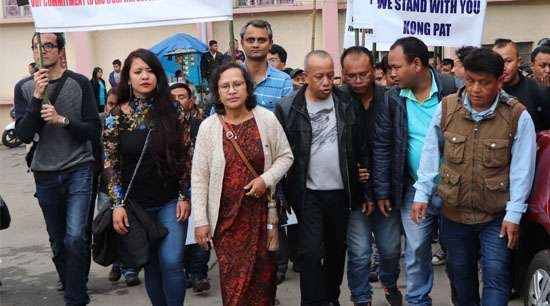 Shillong: The media fraternity of Meghalaya has resolved to keep on working for the society despite all odds, including threats from outlawed organizations.

The Shillong Press Club (SPC) in an emergent Google meet convened on Tuesday night expressed “deep concern at the tone and tenor” of the HNLC (Hynniewtrep National Liberation Council) statement which squarely accused the press of not publishing the proscribed outfit’s bandh calls by obeying the order of the Meghalaya High Court.

The Full Bench consisting of Chief Justice Uma Nath Singh, Justice T Nandakumar Singh and Justice S.R. Sen in its order on May 27, 2015, had specifically directed that the statements of HNLC or any organization which may disturb the even tempo of day-to-day public life and cause violation of Fundamental Rights of citizens, in particular under Article 19 and 21 of the Constitution of India relating to strike, bandh, hartal, road blockade and holding of rallies with unlawful design shall not be issued by any of the print and electronic media.

“In case of violation of this order, the Court may not only proceed under the Contempt of Courts Act but it is also directed that the State Government shall register criminal cases under appropriate provisions of the law,” the High Court had ordered.

“The members were categorical in reminding all that while freedom of expression applies to the journalists as well, obedience to the law of the land in letter and spirit is also an absolute responsibility. As journalists, we must first obey the law of the land and for that matter the universal law of the world and humankind which abhors violence and senseless criminal acts while discharging our professional duties,” the SPC statement asserted.

“May we ask if one violates a standing High Court order which assures due punishment for violators, and is harassed or even incarcerated, who will fend for the family of the journalist? Will the HNLC intervene and sort out the issue or for that matter rescue the journalist from a foreign land,” the SPC questioned.

“Perhaps the HNLC is not aware that journalists perform their assigned duty to the ‘T’ and it is left to the editorial heads to decide what goes and what does not and here too, the universal law of the land applies to the editors as well if not more. In fact, some members felt that this matter should be addressed to the publishers, editors and producers who are legally responsible for the publication/broadcast,” the SPC said.

“It may also be reminded that issuing a threat however veiled it may be, is tantamount to violation of a person’s liberty which also applies to the HNLC which from time to

time seeks support from human rights bodies whenever it has felt wronged,” the SPC pointed

The SPC also sought to draw the attention of the Meghalaya High Court towards this recent event and implored upon it to “comprehend the threat apprehension that the working journalists now have because of such an intimidating statement, and perhaps conceive a permanent solution to this prickly but sensitive matter”.

The journalist fraternity of Meghalaya stands firm in solidarity with one another and will continue to endeavour to serve the peace-loving people of the state in the best possible manner it can, despite the many challenges and stumbling blocks throughout the journey,” the SPC iterated.

“The SPC calls upon the HNLC which has always used the services of the media to announce its intentions and actions and even indicate its desire to return home, albeit on its terms, to ponder over what it has communicated to the press and hopes that prudent wisdom will prevail so that the people of the land already living a beleaguered life with so many uncertainties can at least live a life of lasting peace,” the SPC statement stated.