Lavrov, who arrived in New Delhi on Thursday evening, said: “If India wants to buy anything from us, we are ready to discuss and reach mutually acceptable cooperation.” 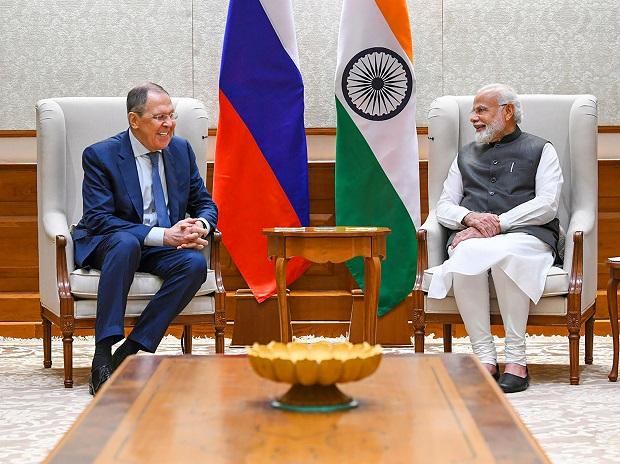 New Delhi: Amid pressure from the West on India, Russian Foreign Minister Sergey Lavrov on Friday said that Russia is ready to discuss supply of oil and high technology to India and also said that New Delhi can play the role of a mediator between Moscow and Ukraine.

In remarks to the media after holding bilateral talks with External Affairs Minister S Jaishankar here, Lavrov also said that India and Russia are moving towards a rupee-ruble system of payment.

To a question on the possibility of India becoming a mediator between Russia and Ukraine, he said: “India is an important country, if India sees to play that role which provides resolution of the problem…. If India is with its position of a just and rational approach to international problems, it can support such a process.”

During his call on PM Narendra Modi later in the day, the Prime Minister too “conveyed India’s readiness to contribute in any way to the peace efforts”, while reiterating his call for an early cessation of violence. Asked if Russia and India were moving to the rupee-ruble system of payment to bypass sanctions, Lavrov told reporters that Moscow has started moving away from using dollars and euros to use of national currencies in dealings with India, China and other countries many years ago.

“Under the circumstances, this trend, I believe, will be intensified, which is natural and obvious… The rupee-ruble has been going on for a long time. We don’t want to depend on a system that would be closed anytime, and we don’t want to be part of a system whose masters can steal your money overnight”, referring to the western financial system that has blocked out Russia as part of sanctions over the Ukraine crisis.

Referring to Russia being shut out of the SWIFT banking system (Society for Worldwide Interbank Financial Telecommunications), Lavrov said Moscow had begun developing national payments systems many years ago, when they realised the “entirely unreliable nature” of their Western partners.

“In Russia, the central bank, several years ago established a system of communication of financial information. India has a similar system, which is called RuPay and it is absolutely clear that more and more transactions would be done through these systems using national currencies, bypassing dollar, euro and other currencies which proved totally unreliable,” he added.

On the supply of discounted Russian oil to India, which has sparked off Western discontent against India, he said: “As regards oil supplies and high technology, if India wants to buy anything from us we are ready to discuss and to reach mutually acceptable forms of cooperation “.

“India and Russia for years have pursued trade in national currencies and this will be intensified including in defence. India is a friend and my visit is in that context. Russia is ready to provide for any product that India needs and we will work out an arrangement,” he added.

On western pressure on India against keeping up its relations with Russia, he said: “I have no doubt that any pressure will affect our partnership… the relationship between India, Russia and China, others have been trying to suppress, and this politics, and they are also trying to force others to follow their politics,” he said, in reference to Moscow’s new push towards a new geopolitical order minus the west.

“I believe that Indian foreign policy is characterised by independence and the concentration of real, national legitimate interests of the country, of the state. The same policy basis exists in the Russian Federation and this makes us as big countries, good friends and loyal partners, an important part of the international relations,” he said.

On the nature of talks with the Indian side, he said they were “characterised by the relations which we have developed with India for many many decades; the relations are strategic partnership, even a specially privileged partnership as our Indian friends called it sometime ago; and this was the basis on which we were promoting our cooperation in all areas, economy, military, technical, humanitarian, investment, and many other fields.”

Elaborating on the nature of the relationship, he said: “We always respect each other’s interests and we always try to accommodate the interests of each other, and this was the meaning of our discussion which covered all bilateral areas of cooperation and covered of course international and regional issues.”

On the new world order with emphasis on cooperation between India, China and Russia, which Moscow is pushing for, he said that it was discussed with the Indian side.

“We discussed among other things our cooperation in the RIC (Russia, India, China), we spoke about developing this trio and how it should be used more actively to stabilise international relations to ensure equality in international relations, and this is very topical because Russia, India and China are now, so we have many plans, we never imposed our products, if countries which are interested in trading with Russia if they have concrete needs to expand the goods that we supply we are always ready to seek agreements based on the balance of interests and mutual benefit.”

“The situation in the region is not perfect, like any other place on earth, and we support the Indian effort and to consolidate the regional countries and to promote mutually beneficial projects in South Asia in particular.”

He objected to the Ukraine crises being termed a “war”. “You called it a war which is not true. It is a special operation, military infrastructure is being targeted. The aim is to deprive the Kyiv regime from building the capacity to present any threat to Russia.”

He said there was progress in the Ukraine talks. “There is progress there, in particular, as regards the recognition that Ukraine cannot be a bloc country, cannot seek happiness in NATO; a nuclear-free, non-bloc neutral status – these are things that are now understood to be absolutely necessary.”