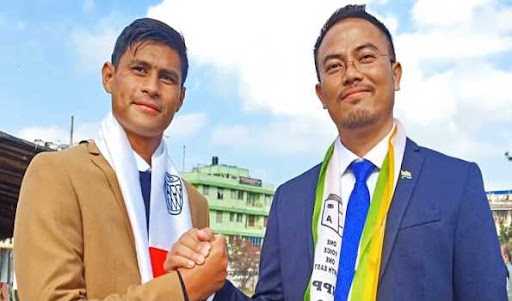 Shillong: The ruling National People’s Party (NPP) and its ally the United Democratic Party (UDP) won all three Meghalaya assembly seats where the by-elections were held on October 30.

The opposition Congress suffered a setback in the by-poll as the NPP snatched away Mawrynkneng and Rajabala assembly seats which were previously held by the Congress, while the United Democratic Party (UDP) won the Mawphlang seat.

Former India’s footballer and UDP candidate, Eugeneson Lyngdoh defeated his nearest rival of Congress Kennedy Cornelius Khyriem by a margin of 4,401 votes in a triangular contest from Mawphlang assembly seat He retained the seat which his late father Syntar Klas Sunn, who was an associate member of the UDP, the second largest constituent of the ruling Meghalaya Democratic Alliance coalition.

NPP candidate Pyniaid Sing Syiem defeated his nearest rival of the Congress opponent Highlander Kharmlaki by a margin of 1,816 votes in the Mawrynkneng assembly seat, which had fallen vacant due to the demise of legislator David Nongrum of the Congress.

Syiem, who is also the Chairman of Khasi Hills Autonomous District Council (KHADC), polled 14,117 votes, while Kharmalki secured 12,361 votes. With this victory, the NPP and the UDP has increased its strength to 23 and eight respectively in the Meghalaya Assembly. The Congress’ tally has gone down to 17.

The outcome of the bye-elections is significant in view of the fact that general assembly elections in Meghalaya are due in 2023. Moreover, the byelection result would further widened the fissure within the Congress party between its functionaries. State Congress President, Vincent Pala and Congress Legislature Party leader Mukul Sangma had differences, which has created rift within the party.

Chief Minister Conrad K Sangma, who is also the national president of the NPP said, “People have reposed their faith in this government. There has been a lot of negativity by the opposition in terms of making very nasty comments and the reply need not be given by us but by the public themselves”.

“The mandate is very clear that the people have voted against the Congress,” Sangma said and added that there were “clear divisions and infighting” within the opposition party. The Chief Minister also said that there were chances that “exodus might take place” from the Congress, which he compared to a driver-less bus.

The public has spoken and given their mandate,” Conrad said and thanked the people of the three constituencies for having “reposed their faith and trust in the government”. Senior Congress legislator Dr. Mazel Ampareen Lyngdoh admitted that “infighting” within the party and money power are the two main factors behind Congress’ defeat in the by-elections.