Despite frantic attempts, the party was unable to finalise the list of members in Saha's cabinet as veteran saffron leader and Deputy Chief Minister in Deb's cabinet Jishnu Dev Varma and another former Minister Ram Prasad Paul refused to serve in the government. 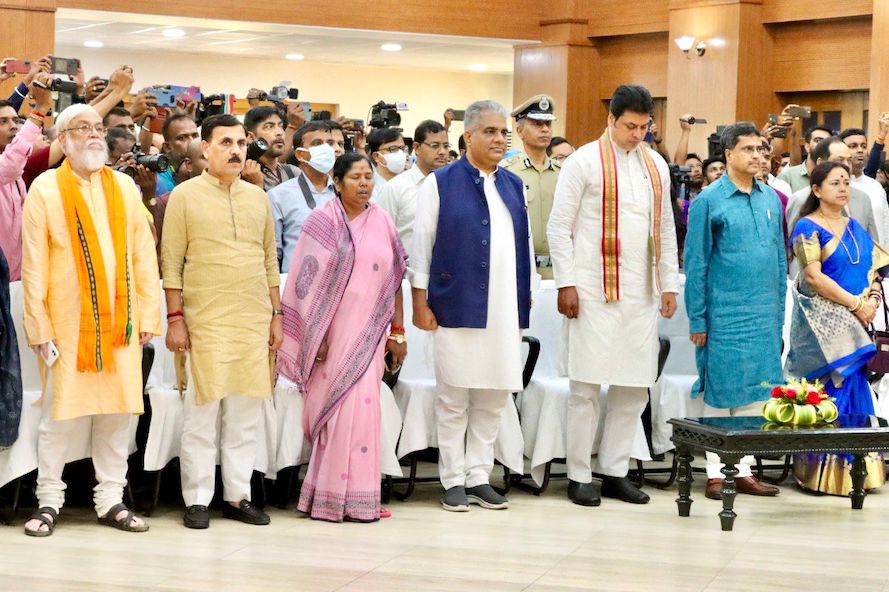 Agartala: Soon after his swearing-in, Tripura Chief Minister Dr Manik Saha along with the party’s central leaders convened a BJP legislature party meeting at the State Guest House here on Sunday to defuse the discontent that has surfaced after his elevation as the successor to Biplab Kumar Deb.

Deb resigned on Saturday at the instruction of the party’s central leadership.

Despite frantic attempts, the party was unable to finalise the list of members in Saha’s cabinet as veteran saffron leader and Deputy Chief Minister in Deb’s cabinet Jishnu Dev Varma and another former Minister Ram Prasad Paul refused to serve in the government.

At the same time, BJP’s alliance partner IPFT, having seven MLAs, was not able to select its cabinet nominees. The two top IPFT leaders – N C Debbarma and Mevar Kr Jamatia, both ministers in Deb’s cabinet – are locked in a power tussle that has caused fissures in the party.

While four MLAs claimed to have joined Debbarma’s camp, three others remain with Jamatia, while one lawmaker has crossed over to TIPRA Motha.
In the swearing-in ceremony, despite being in the same party, Jamatia and Debbarma went separately and the latter was found after the ceremony in the hall.

Meanwhile, IPFT sources said that Debbarma has been lobbying for his inclusion as also that of another member of his group in the new cabinet. Similarly, Jamatia is also trying to get two cabinet slots for himself and another loyalist.

According to BJP insiders, the central leaders and BJP state functionaries failed to contact Jishnu Dev Varma despite five attempts since Saturday night.
Finally, at the request of Home Minister and BJP stalwart Amit Shah, Dev Varma along with Ram Prasad Paul reached Raj Bhawan after the oath-taking ceremony was over.

Replying to a query, Dev Varma told the media, “I have no idea why this change was made – may be the central leaders considered it is necessary. We have done our best for the people of Tripura and I hope in future we will continue to do it.”