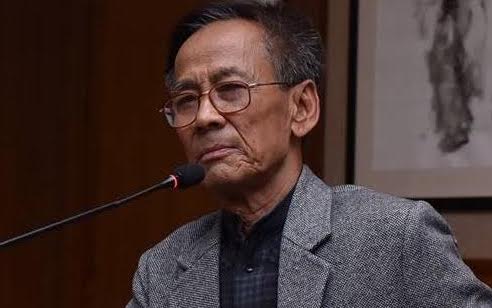 Imphal: Manipur’s renowned filmmaker and lyricist Laimayum Banka Sharma will be honoured with the Lifetime Achievement Award at the 14th Manipur State Film Festival which is currently being held at the state capital.

Seventy-six year-old filmmaker has been associated with Manipur films since the time of first Manipuri feature film – Matamgi Manipur’,  though he was not a part of the film crew. He even assisted the Director, Debkumar Bose through suggestions for particular scenes of the film to capture the right emotions especially in the classic number of “Eigi Punshi Nangga”.

Banka was nominated for the award in honour of his  immensely valuable contributions towards the growth of Manipuri Cinema. The award  carrying a Maibi memento, citation, shawl and a cash prize of Rs. 1,00,000/-

Banka was at his peak of popularity after he took on board ‘Nightingale of Bollywood/India’  Lata Mangeshkar, as a playback singer for his ‘Meichak’ and later ‘Madhabee’.

Always with an aura of self-esteem, Banka always wanted to be “The Captain” in  production of a film. So far, he has directed several timeless films such as Wangma Wangma,  Yairipok Thambalnu, Meichak, Madhabee, Poppy and Laman. He also made short films  including ‘Carpenter and his wife’ and ‘Mitsna’.

He was also among the early Manipuris who went to Mumbai to receive professional film schooling. He was trained in editing from Film and Television Institute, Mumbai in 1971 where  he acquainted various Bollywood personalities though he did not complete the entire course.

The seasoned filmmaker is now eyeing to make the legendary ‘Khamba-Thoibi’, digitally  remake ‘Madhabee’ and write a book sharing his years long experiences.