Nadal, who was playing in his second ATP Tour singles match since the US Open, has now suffered three straight defeats, all against Americans. 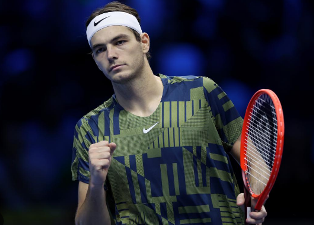 Turin: Taylor Fritz of America completed a dream debut at the ATP Finals with a 7-6(3), 6-1 over Spains Rafael Nadal.

With a win on Sunday, Fritz dented Nadal’s bid to win the lone big title that has eluded him in his legendary career. The Spaniard’s defeat also means he must now claim the Turin title to overtake Carlos Alcaraz for the year-end No. 1 ATP Ranking.

“It feels great. I felt like coming out first match, especially for my hopes of getting out of the group, it was going to be really important,” ATP tour quoted Fritz, who moved above Casper Ruud into first place in the Green Group.

“I didn’t want to put myself in a position where I needed to win out if I wanted to move on. I came out and played a great match, and I couldn’t be happier.”

Fritz improved to 2-2 in his ATP Head2Head series against Nadal, backing up his win in the Indian Wells final in March — a match the American nearly didn’t play due to an ankle injury.

Nadal, who was playing in his second ATP Tour singles match since the US Open, has now suffered three straight defeats, all against Americans.

He was turned back by Frances Tiafoe at the US Open and Tommy Paul two weeks ago in Paris before Sunday’s loss at the hands of Fritz.