Pelosi was among a handful of party officials on Sunday who backed President Biden for re-election in 2024. 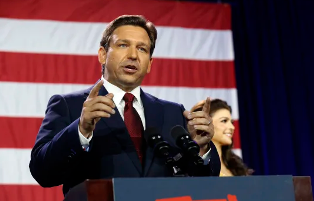 Washington: News that Democrats have held the US Senate after midterm elections this week has sparked recriminations within the Republican Party.

Critics of former President Donald Trump blamed him for the poor showing while other Republicans faulted their Senate leader, Mitch McConnell, BBC reported.

The White House, meanwhile, made its strongest indication yet that President Joe Biden will run for re-election.

The race for the US House of Representatives remains uncalled.

Republicans are still favoured to win the lower chamber of Congress which would severely hamper President Biden’s plans but their likely majority is shrinking as votes continue to be counted.

Over the weekend, US networks projected that Democrats had held two Senate seats in Arizona and Nevada, retaining control of the upper chamber, the BBC reported.

“This is the third election in a row that Trump has cost us the result,” Maryland’s Republican Governor Larry Hogan, a long-time critic of the ex-president, told CNN. “He said we would be tired of winning. Well I’m tired of losing.”

But the real test, says BBC’s North America correspondent Anthony Zurcher, will be whether Trump allies turn on him in the days and weeks ahead.

History suggests the party controlling the White House usually loses seats in a midterm election, and Democrats’ performance this year is considered the best for a sitting party in at least 20 years.

But Democrats “never accepted the punditry” and focused on “the contrast between themselves and their opponents”, the senior California Democrat said, the report said.

Pelosi was among a handful of party officials on Sunday who backed President Biden for re-election in 2024.

Senior White House adviser Anita Dunn told CBS News the President was not influenced by “what the other side is doing or what another candidate may be doing”, and will announce his decision soon.

She said the midterm results were “hugely consequential” for the party’s agenda and Biden believes he is “the best person to continue the progress that we have made”.

If Biden does run again, he will likely be in a rematch of his 2020 race with Trump, who is widely expected to formally announce for 2024 this coming Tuesday.

The potential announcement is upending and scrambling old allegiances within the party, with some allies of the former President attacking his detractors, most notably Senate minority leader Mitch McConnell.

“The Republican brand, set by Mitch McConnell on down, is not exciting, is not persuasive, is not convincing to voters,” former Trump White House adviser Stephen Miller told Fox News Sunday.