Addressing the Goa Maritime Conclave on ‘Maritime Security and Emerging Non-Traditional Threats: A Case for Proactive Role for IOR Navies’, Shringla also said the approach to maritime security articulated by Prime Minister Modi, the vision of SAGAR (Security and Growth for All in the Region), and the central ideas underlying India’s bilateral and plurilateral initiatives, constitute a complementary set of principles. 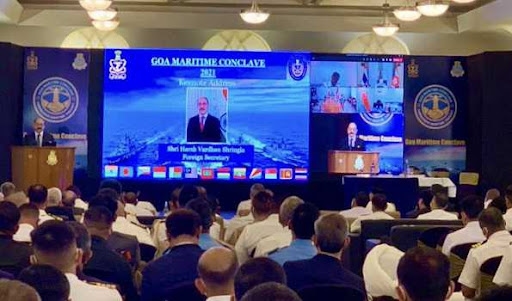 New Delhi: Stressing that this is the century of Asia and Africa, and the Indian Ocean Region is a vital economic space that both these continents share, Foreign Secretary Harsh Vardhan Shringla on Monday said that a new cooperative architecture for the common maritime space of the region that ensures security for its inhabitants, driven by current realities and the aspirations to lead better lives, is necessary to grasp the opportunity from the shifting economic currents.

Addressing the Goa Maritime Conclave on ‘Maritime Security and Emerging Non-Traditional Threats: A Case for Proactive Role for IOR Navies’, Shringla also said the approach to maritime security articulated by Prime Minister Modi, the vision of SAGAR (Security and Growth for All in the Region), and the central ideas underlying India’s bilateral and plurilateral initiatives, constitute a complementary set of principles.

“These, together, with India’s commitment to UNCLOS and customary law of the seas, provide a direction and a framework for efforts to enhance public good in the Indian Ocean Region and the broader Indo-Pacific,” he said in an address to the naval chiefs and representatives from Bangladesh, Comoros, Indonesia, Madagascar, Maldives, Malaysia, Mauritius, Myanmar, Seychelles, Singapore, Sri Lanka and Thailand.

He quoted Prime Minister Modi’s remarks at the UNSC Open Debate on Maritime Security, in which he had called for the creation “of a framework of mutual understanding and cooperation for the preservation and use of our common maritime heritage. No country can make such a framework alone. It can only be realized through a common effort.”

He also outlined the PM’s five principles that define India’s approach to maritime security.
He outlined PM Modi’s vision of SAGAR wherein India called for a free, open and inclusive order in the Indo-Pacific, based upon respect for sovereignty and territorial integrity of all nations, peaceful resolution of disputes through dialogue and adherence to international rules and laws.

“India’s concept of the Indo Pacific is inclusive in nature and supports an approach that respects the right to freedom of navigation and overflight for all in the international seas.

“India’s Indo Pacific vision is premised upon the principle of ‘ASEAN-Centrality’.

“India’s approach is based on cooperation and collaboration, given the need for shared responses to shared challenges in the region,” he said.
He reiterated PM Modi’s remarks at the UNSC debate to say that “the creation of a framework can not be made by any one country and that it requires a common effort”.

“I began by referring to the importance of sea power and to the moment of opportunity for all of us in the Indian Ocean Region to benefit from shifting economic currents.

“Prosperity, and the well-being of our people, is built on the foundation of law and order and security. A new cooperative architecture for our common maritime space that ensures security for its inhabitants, driven by our realities, and our aspirations to lead better lives, is necessary to grasp this opportunity,” he said.

“Opportunities tend to have expiry dates. We must, as fellow travellers in a voyage, work swiftly to ride these momentarily favourable tides and currents. If we are able to do so, we in the Indian Ocean Region, through common effort, may be able to set ourselves on a trajectory to improved futures,” the Foreign Secretary stressed.

Earlier, in the speech, he highlighted the new threats and security challenges in the Indian Ocean Region.

He said Non-traditional threats and new technologies have combined to form a whole new spectrum of sub-conventional security threats and problems and highlighted Transnational crime syndicates that conduct human trafficking, smuggling, narcotics and IUU (illegal, unreported and unregulated) operations on an expanded scale. “They have, in effect, become non-state actors working diligently to diminish security and well-being in the region.”

“The blue economy potential of the region has while creating opportunity and prosperity, generated vulnerabilities,” he said and outlined irresponsible fishing that is damaging food security of the region, more accidents, more pollution caused by oil spills.

“They also provide targets for terrorists, supported and encouraged by the resources of governments. Using the oceans to move and infiltrate, they threaten offshore and coastal assets. Such terrorists tend to combine with transnational criminals. These alliances escalate instability and violence levels exponentially,” he said.

“Another set of challenges arises from geopolitical volatilities. A lack of commitment to settled international law has led to increased militarization of the region. Militarization always adds to complexities,” he said, in an allusion to China’s hegemonistic moves in the region.

“The Indian Ocean Region, it is quite obvious, will face an increasingly complicated, rapidly evolving, and more demanding security situation, with an ever-increasing battery of threats and uncertainties,” he said.
Shringla said the evolving security threats requires the Indian Ocean Region countries and especially their navies, coast guards and maritime security agencies, to do more together.

“India stands ready and willing to do its share – and more – in tackling these problems,” he asserted.

“We cannot anticipate each and every problem that will arise. We can however work on strengthening the structures, the understandings, the procedures, and the resources, that are deployed. This will enable us to better manage known problems. It will also enable us to create a “surge” capacity to deal with the unknown.”

Shringla said a number of specific areas of cooperation have shown encouraging results and point towards directions in which the countries can intensify joint efforts, leverage each other’s strengths, and generate synergies.

“Domain awareness is central to any preventive security strategy. The joint coastal radar surveillance systems that India has worked on with Sri Lanka, Mauritius, Maldives and Seychelles; the India-Bangladesh MoU on coastal radars; information fusion centres and multilateral maritime coordination centres in India, in Abu Dhabi, Seychelles and in Madagascar; and, White Shipping Information Exchange agreements, have, we can agree, helped improve not just domain awareness, but also the security situation.”

He said the anti-piracy patrols in the Indian Ocean, in the waters of the Middle East and Africa, and the maritime coordinated patrolling agreements with Myanmar, Thailand, Bangladesh, and Indonesia, have also improved security and understanding.

“We have also worked together to conduct training programmes, workshops and seminars and deploy mobile training teams.

“Institutional dialogues between maritime security agencies in partner countries help build relationships and processes that contribute to the improvement of security-related outcomes. An increasing number of such dialogues are taking place,” he added.

He said the pandemic has demonstrated like few other events could, “the importance of our capacity to mount HADR (Humanitarian Assistance Disaster Relief) operations, and assist each other”.

India has been called upon to respond to situations in our extended neighbourhood. This is a demonstration of solidarity with partners and of commitment to the principles of humanitarianism. India also believes that alleviating suffering is central to reducing insecurity and building trust and confidence in keeping with our philosophy of Vasudhaiva Kutumbakam, or the world is one family,” he stressed.

“Instability, insecurity and humanitarian crises have also forced us to conduct a number of complex and demanding evacuation operations,” he said and outlined the Indian Navy’s Mission Sagar during the pandemic to Maldives, Mauritius, Seychelles, Madagascar, Sudan, SouthSudan, Djibouti, Eritrea, and Comoros.

“India also deployed Rapid Response teams during this period to several countries, including Comoros, Kuwait, Maldives, and Mauritius,” and provided critical healthcare products, including vaccines, often in the face of daunting logistical challenges, to 150 countries.