The main issues raised by the political parties included concerns about use of money power, illicit liquor, narcotics drugs and intimidation to influence voters. 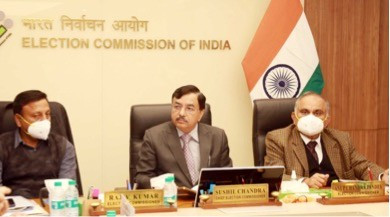 The main issues raised by the political parties included concerns about use of money power, illicit liquor, narcotics drugs and intimidation to influence voters. Political parties requested for strict vigil on election expenses by candidates to ensure free and fair polls.

The Commission reiterated that it has zero tolerance for misuse of money or muscle power or partisan behaviour of State machinery vitiating free and fair elections. CEC Sushil Chandra underscored that strict action would be taken against such erring officials. He added that Expenditure Observers will be deployed for strict vigil to ensure inducement-free elections in the State. Chandra  also elaborated on ECI’s cVIGIL App mechanism for registering complaints for prompt redressal of MCC violations as also the toll free number 1950.

The Commission assured the representatives that ECI will ensure measures like webcasting/videography, deployment CAPF personnel and Micro Observers wherever necessary in identified vulnerable polling areas, to ensure free, fair and peaceful polling.

The Commission highlighted that for the first time in the State, the option of a Postal Ballot facility would be provided during the elections for Absentee Voters which includes 80+ Sr citizens, PwD electors and Covid-19 suspects or affected persons.

The postal ballot facility is an optional facility and ensures total secrecy of voting. Representatives of candidates will be present during the process and the total procedure will be videographed. In the state, 14,565 Persons with Disabilities and over 41,867 senior citizens (80+) have been mapped.

During the review meeting, the Commission emphasised focus on the conduct of safe elections with 100% vaccination of all polling staff, proper sanitisation and social distancing at the polling stations. CEC Chandra conveyed his concern to Chief Secretary, Manipur regarding the low vaccination rate in the state and asked for expediting the same.

It was directed to ensure that distribution of liquor, drugs, freebies and cash is effectively checked and the electoral process is not vitiated with unlawful activities. CEC also directed for strict vigil on the international border to ensure no unlawful transit and infiltration across borders.

The Commission also directed the CEO to ensure quick disposal of complaints received during electoral process and ensure robust mechanism for the same.