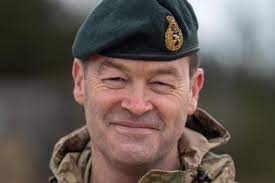 London: Britain must be prepared to act rapidly to prevent the spread of war in Europe, BBC reported the new army head as saying on Tuesday.

Likening the current conflict in Ukraine to the run-up to World War Two, General Sir Patrick Sanders, the chief of the general staff, said Britain faces its “1937 moment”.

Delivering a speech to the Royal United Services Institute think tank, Sanders said: “Let me be clear: the British Army is not mobilizing to provoke war, it is mobilizing to prevent war,” the report said.

“We’re living through a period of history as profound as the one our forebears did 80 years ago. And now, as then, our choices will have a disproportionate effect on the future. This is our 1937 moment.”

In his first public engagement since taking up his new post earlier this month, Sanders said: “If we fail to deter, there are no good choices given the cost of a potential counterattack and the associated nuclear threat. We must therefore meet strength with strength from the outset and be unequivocally prepared to fight for Nato territory.”

“This is the war that we are mobilizing to prevent by preparing to win… And in doing so, it’s my hope that we never have to fight it.”