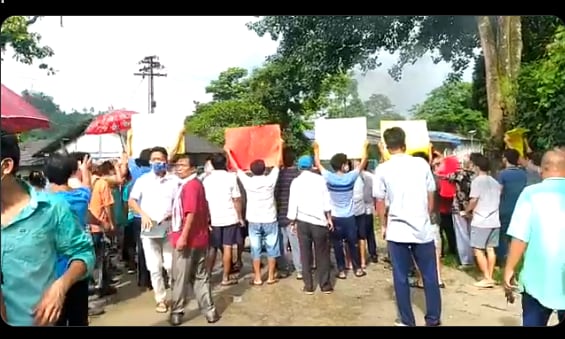 Itanagar: The Border Roads Organisation (BRO) will initiate an inquiry over the Kimin incident and it will be concluded at the earliest without any delay, Arunachal Pradesh Home Minister Bamang Felix said here on Monday.
It may be mentioned here that the country’s premier road construction agency had apologised “unconditionally” to the people of Arunachal Pradesh late last month after it had drawn a barrage of condemnation from various quarters for white pasting of signboards outside the ITBP’s RTC Kimin and erroneously portraying Kimin under Papum Pare district of Arunachal as a part of Assam during Defence Minister Rajnath Singh’s visit to the area to e-inaugurate 12 roads built by BRO on June 17.
Addressing a press conference, Felix said a meeting was convened by him on Monday, where Lt Gen Rajeev Chaudhary, Directorate-General (DG) of BRO was briefed about the findings and recommendations of state government constituted ‘high-level committee’ and ‘fact-finding committee’ of the Arunachal Indigenous Tribes Forum (AITF), a conglomeration of all apex community-based organisations (CBOs), on the Kimin issue.
After detailed deliberation over the matter, besides inquiry, it was also agreed upon that the BRO based on its findings, will take suitable appropriate action, he said.
The meeting also decided that to ensure fair inquiry concerned BRO officers/officials shall be transferred to other locations, Felix informed.
“Three senior officers of BRO posted in Arunachal Pradesh have already been transferred to other locations for fair inquiry,” he said.
It was also decided that storage of dangerous construction materials from the Kimin depot which is situated within the town will be shifted to some other safer location, Felix said.
He said that Lt Gen Chaudhary has expressed his gratitude to the state government for its initiative to resolve the issue.
“He is seized of the Kimin incident and expressed regret for erroneously showing Kimin as part of Assam. He stated that Kimin has always been a part of Arunachal Pradesh and will always remain so,” Felix quoted the DGBRO as saying.
On being asked about FIR ( lodged by four political parties) at Kimin police station over the same, Felix,”We are aware of it.”
“I would request to people of Arunachal Pradesh, especially people of Kimin in particular to conclude the issue here. The matter is almost in resolve form. Lt Gen Chaudhary has assured that such incident will not happen again in the future,” Felix said.