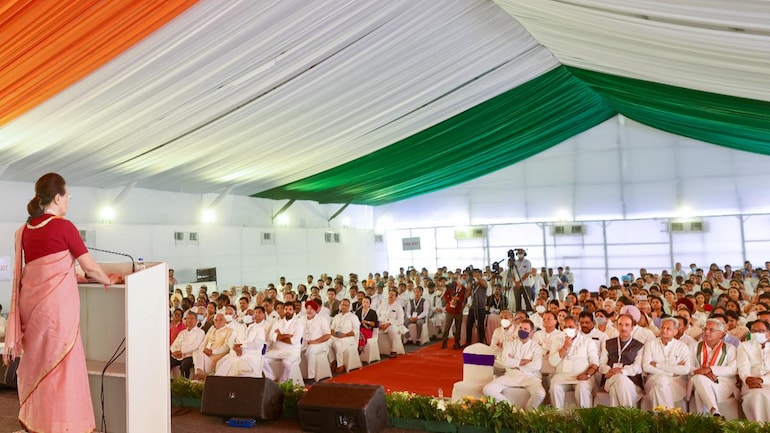 New Delhi: As the Congress leaders work on an action plan to implement the deliberations at its Chintan Shivir, the party has identified the Hindi heartland as it’s battlefield with the incumbent BJP, and the Udaipur declaration, which was ‘thought, written, discussed and passed’ in Hindi, sets the tone for this battle.

Days after Congress announced a ‘Bharat Jodo’ yatra that will start from Kanyakumari on October 2, a party leader said it was for the first time at a Chintan Shivir of the party that the resolution was drafted in Hindi, and was translated in English later.

The leader said at the earlier Chintan Shivirs at Panchmarhi (1998), Shimla (2003), and Jaipur (2013), the resolutions were drafted in English, and later translated into Hindi.

“The resolution was thought, written, discussed and passed in Hindi. This was deliberate. We are facing the BJP in the Hindi belt. On 200-250 seats in the Hindi heartland we are in direct fight with the BJP, ” said the leader who did not want to be quoted.

Meetings are being held to discuss the plans for the Bharat Jodo Yatra, the first nationwide Yatra being held by the Congress. From June 15 to October 2, Congress will hold the second phase of ‘Jan Jagaran Abhiyaan’, which will be focused on economic issues.

The Bharat Jodo Yatra is expected to go on for over five months, party sources said.