Poll personnel were apprised of the theoretical aspects, handling of EVMs, Booth Apps, IT apps and Communications. The trainees also underwent Mock Polls for better familiarisation 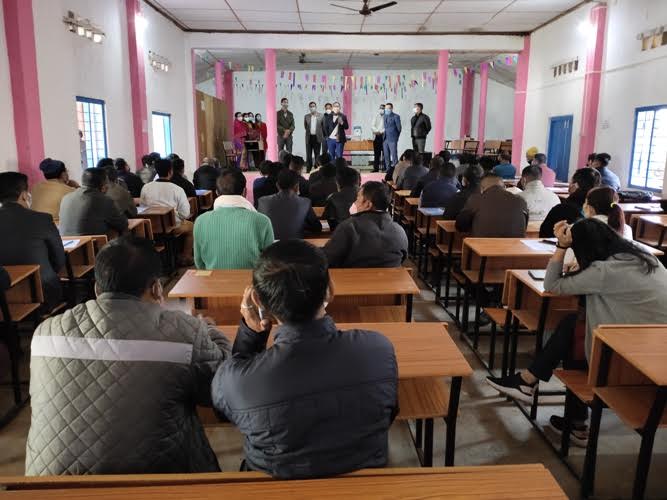 Poll personnel were apprised of the theoretical aspects, handling of EVMs, Booth Apps, IT apps and Communications. The trainees also underwent Mock Polls for better familiarisation. During the course of the phase-wise training which will continue till January 22, 300 polling personnel will undergo training each day under Assembly Level Master Trainers, EVM Master Trainers and DIO (NIC).

District Election Officer of Bishnupur, L. Bikram accompanied by ADC/MCC Nodal Officer Bishnupur; CEO, H. Bobby Sharma, ZP/District Nodal Officer (Training) RK Dayananda, inspected the training. Interacting with the trainees during the inspection, the DEO encouraged them to be well-prepared for efficient execution of poll duties. He also remarked that disciplinary action will be initiated against any polling official with undue negligence of duty. The DEO also informed that necessary precautionary measures like thermal screening and hand sanitization will be made mandatorily for everyone on poll day. Responding to a query on poll duty exemption on ground of not being fully vaccinated, the DEO urged every polling official to get fully vaccinated at the earliest.

Mentioned may be made that all the 6 assembly constituencies of Bishnupur with a combined strength of 181715 electors and 236 polling stations will go to poll in the first phase on February 27.

Earlier, the DEO Bishnupur had notified for submission of request for exemption along with medical certificates and diagnosis details latest by January 22 for consideration by Medical Board. It further notified that medical examination for exemption from election duty on medical grounds for Presiding Officers and Polling Officers will be held on January 24, 2022 at District Hospital, Bishnupur from 11 AM onwards.