At a joint press conference with Patel and Nishad, BJP President JP Nadda said the alliance would fight all 403 seats in Uttar Pradesh, even as seat sharing remains to be finalised. 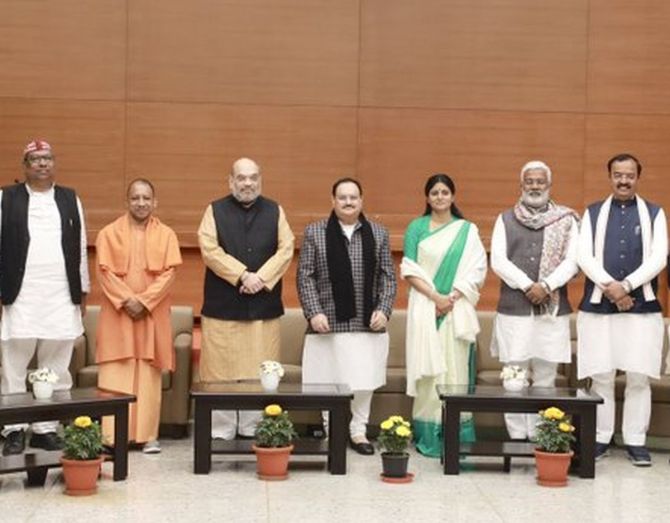 New Delhi: The BJP on Wednesday announced it will fight the Uttar Pradesh polls in alliance with Anupriya Patel’s Apna Dal and Sanjay Nishad’s Nishad Party, and expressed confidence over winning the state again.

At a joint press conference with Patel and Nishad, BJP President JP Nadda said the alliance would fight all 403 seats in Uttar Pradesh, even as seat sharing remains to be finalised.

“BJP is contesting the elections in Uttar Pradesh with its allies. We all came together in the Lok Sabha elections and we will win the 2022 assembly elections as well,” BJP president JP Nadda said.

“The BJP along with Apna Dal and Nishad Party will contest all 403 seats,” he said.

The BJP president said the “double engine” government in the state and center has transformed UP.

“NDA govt has brought rapid development and investment to UP,” JP Nadda said.

He said law and order is a major issue in the state, and said, “Remember the scenario five years ago, there was migration, after 5 pm life would come to stand still, there was a mafia-govt nexus. Today there is rule of law”.

Apna Dal leader and Union Minister Anupriya Patel said the combination of the three parties will bring development, as well as social justice.

“I believe Apna Dal-BJP- Nishad Party alliance is a cocktail of social justice and development. UP needs both,” Patel said.

She also credited the Narendra Modi government for its policies for the backward classes, and mentioned the National Commission for Backward Classes being made a constitutional body and quota for OBC in NEET exams among steps taken by the government.

Patel said there is more to be done on the front of social justice, and said there should be a separate ministry for backward classes.

Nishad Party Chief Sanjay Nishad meanwhile said the BJP always delivers its promises, and said NDA would get a bigger mandate than 2017 this time.

“I would appeal to people, BJP delivers what it promises, whether it is article 370, or Ram Temple. We have had our discussions not just on seats but on winning the election,” he said.

The leaders also said that they will finalise the seat sharing soon.