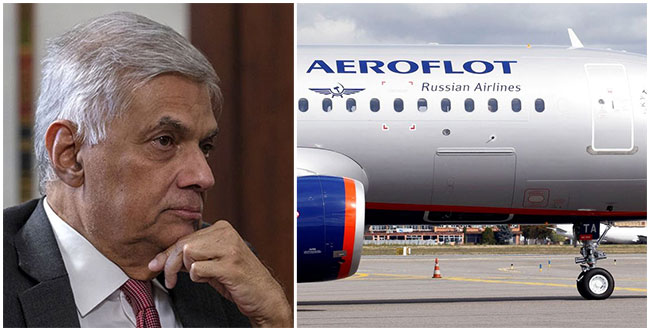 Colombo: Sri Lanka Prime Minister Ranil Wickremesinghe on Saturday informed Russia through the Foreign Ministry Secretary that the issue over the Aeroflot aircraft is a private legal issue and not between the two countries after the Russian flagship carrier, Aeroflot suspended commercial flights and the sale of tickets to Colombo.

This was over controversy that arose after Sri Lankan civil aviation authority prevented an Aeroflot flight from departing the Colombo airport on an order by the Commercial High Court of Colombo on June 2.

Aeroflot Airlines Airbus A330-300 which arrived empty from Moscow to take back 275 Russians in Colombo, departed from BIA Saturday afternoon.

Sri Lanka’s Ministry of Foreign Affairs had issued a statement on Saturday with reference to the detention of Aeroflot passenger aircraft flight SU-289 which is currently at the Bandaranaike International Airport (BIA) saying that on 2 June 2022, the Commercial High Court of the Western Province issued an Enjoining Order on the Aeroflot flight restraining it from taking off from Bandaranaike International Airport and the case relates to a commercial dispute between the Plaintiff, Celestial Aviation Trading 10 Limited, an Irish company against the Aeroflot.

The matter is still pending final determination of the Court, the foreign ministry said, adding that this matter is also under consultation through normal diplomatic channels.

Sri Lanka Minister Nimal Siripala De Silva said that the Attorney General will make submissions to the court over the Aeroflot issue on Monday (June 7).

The owner of the airport Celestial Aviation of Ireland had filed an action against Aeroflot pending arbitration on the lease of the Airbus A330 aircraft in London.