"I would like to urge everyone to speak about Myanmar. As Miss Universe Myanmar since the coup, I have been speaking out as much as I can," she said. 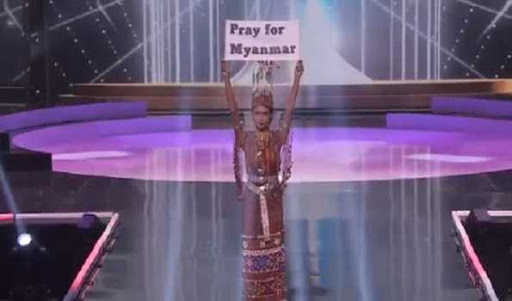 Nay Pyi Taw: Myanmar’s Miss Universe contestant Thuzar Wint Lwin, used the pageant stage to urge the world to speak out in support of her people and against the military junta, which declared a coup d’etat earlier this year.

In a video message for the competition, she said, “Our people are dying and being shot by the military every day. I would like to urge everyone to speak about Myanmar,” where she was appearing in the finals at the Seminole Hard Rock Hotel & Casino in Hollywood, Florida on Sunday.

“I would like to urge everyone to speak about Myanmar. As Miss Universe Myanmar since the coup, I have been speaking out as much as I can,” she said.

Lwin did not make it to the last round of the Miss Universe competition, but won the award for Best National Costume. As she paraded with her national costume, she held up a placard that read: “Pray for Myanmar”.

The coup in Myanmar started on the morning of February 1, when the military refused to accept the results of the elections, in which the National League for Democracy(NLD), Myanmar’s leading civilian party, won 83 percent of the body’s available seats, which was widely seen as a referendum on the popularity of Ms Aung San Suu Kyi.

The coup was effectively announced on the military-owned Myawaddy TV station when a news presenter cited the 2008 Constitution, which allows the military to declare a national emergency. The state of emergency, he said, will remain in place for one year.

Military commander-in-chief Min Aung Hlaing has taken power. He said the military was on the side of the people and would form a “true and disciplined democracy”.

The military says it will hold a “free and fair” election once the state of emergency is over.

It has been over 100 days since the anti-democratic step was taken. Since then protests, strikes and a civil disobedience campaign have crippled businesses and the bureaucracy in an overwhelming public rejection of the return of military rule.