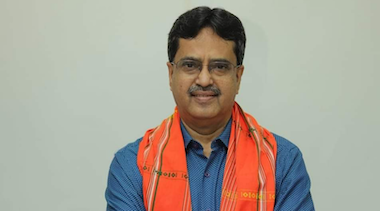 Agartala: Turmoil in Tripura BJP has deepened further after as many as 15 senior BJP leaders including a minister of the Biplab Kumar Deb government sought the resignation of the party-state president Dr Manik Saha blaming him for failing to manage the party and organisations.

The Minister of Cooperation, Fire and Emergency Service Ram Prasad Paul and others in a letter given to Dr Saha and sent the copy to BJP top functionaries in New Delhi alleged that for Saha, BJP in the state has severely been suffering for the last two years and the internal squabble took worst shape that created uncertainty of future.

“We all state level senior leaders of BJP those who spent almost 30 years with this organization awfully Sorry to inform you in your last 26 months as a president of Tripura Pradesh BJP, Party has not only severely suffered in almost every Mandal of the state, but moral of the karyakartas (workers) and elected government bodies such as Panchayat members, MLA’s etc has gone down to such low that they even don’t bother to leave their official posts and leaving the party,” the letter stated.

They claimed that after Dr Manik Saha became president of Tripura BJP in January 2020 in almost every Mandal parallel organization running between two factions of BJP and it is a matter of shame that Police intervene in many cases to stop BJP’s inner fighting in the public.

“Things have become worse because hardly you have visited any Mandals and districts personally in the last 26 months to evaluate why things are going wrong and neither offered any solution to resolve the issues and dissatisfaction cropped up among the party rank and file”, the leader alleged in the letter.

There is no coordination between the party and the government; as a result, people became unhappy with the state government, they alleged.

The leaders claimed that Dr Saha somehow for some unknown reason directly became President of BIP by violating all organization constitution where it is mentioned nobody can become president without direct office-bearer experience of at least 10 years but he (Saha) joined BJP in 2016 and in 2020 he became the president of the party, which was not accepted by the BJP workers.

“Manik ji now three elections including village council, by-elections in five constituencies and assembly election 2023 are approaching, please vacate your chair now for larger interest and help BJP to develop organization and win every election. You vacate the post and help a new competent experienced person to take over as BJP Tripura President in this critical hour. Remember without any proper election by depriving competent and experienced senior leaders of the BJP party to take over,” they added.