BJP legislator Sanbor Shullai interrupted Speaker Metbah Lyngdoh when the latter drew NDA’s presidential candidate Droupadi Murmu's attention to the ‘atrocities’ on Christians in the country while delivering a speech in her presence. 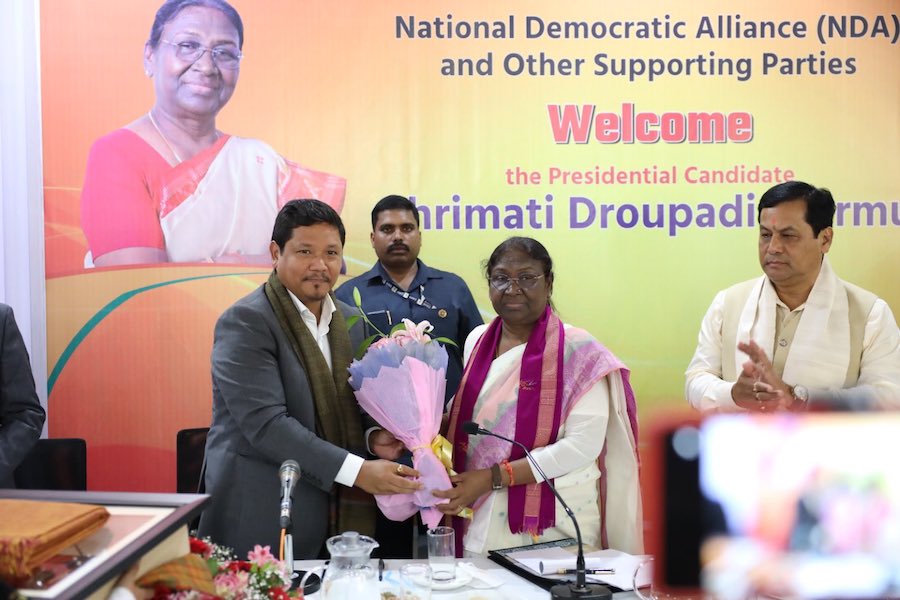 Shillong: Meghalaya Chief Minister Conrad K Sangma on Friday said “appropriate action” would be initiated against state Animal Husbandry Minister and BJP legislator Sanbor Shullai for having interrupted Speaker Metbah Lyngdoh when the latter drew NDA’s presidential candidate Droupadi Murmu’s attention to the ‘atrocities’ on Christians in the country while delivering a speech in her presence.

“…When this incident happened, I was present. The Speaker had raised certain concerns which were concerning many sections of society and very genuine issues were raised and it is appropriate in front of a presidential candidate to raise because she would be in a position in the near future to take appropriate actions by keeping these issues in mind,” the Chief Minister, also the national president of the National People’s Party (NPP) told reporters.

“But while those concerns were being raised, there was a reaction from one of the MLAs, Sanbor Shullai of BJP and in an occasion like that, where they are garnering support for the presidential candidate, it was not appropriate for the reaction that we saw by the minister…it was a very inappropriate behavior…it was not correct, especially in front of the presidential candidate…it did not look nice to do that,” he observed.

Stating that he had met the Speaker on Friday and told him that he had taken note of the incident, Sangma asserted, “We will take appropriate action as and when it is necessary…I have given the assurance that we will definitely look into the matter”.

During the felicitation programme of NDA Presidential nominee Draupadi Murmu at the Orchid Lake Resort on July 6, Shullai disrupted the speech of the Speaker after the latter raised concerns over the alleged atrocities perpetrated on Christians and urged Murmu to ensure that such incidents do not occur.

Meanwhile, Shullai, who is currently in Kolkata, on Friday tendered his apology to Speaker Lyngdoh for disrupting his speech

“I would like to clear the air by stating that the turn of events was completely unintended and that it has been completely misinterpreted. I will personally speak with the Chief Minister and the Speaker with regards to it after my return from Kolkata and shall extend my apology in case it has caused any kind of distress to anyone at the meet,” Shullai said in a press statement.

Shullai also criticised party colleague and senior legislator Alexander Laloo Hek for having “tried to get some political mileage out of it” and sought action against him by the party.

Demanding action against Hek, Shullai said: “I personally condemn the statement made by A.L. Hek and demand timely action be initiated by our party state president as he (Hek) seems to be completely endorsing the statement against the BJP.

“If AL Hek and others endorse that BJP is an anti-Christian party then why align with BJP?” Shullai asked.

“I once again extend my sincere apologies towards the whole incident and reiterate that my comment was made to acknowledge the fact that BJP is a secular party and doesn’t promote any anti-religious activities be it Christian or others,” the BJP lawmaker and cabinet minister iterated.

The BJP, which has two elected assembly members, is a constituent of the National People’s Party (NPP)-led ruling Meghalaya Democratic Alliance.

Condemning Shullai for disrupting the speech of the Speaker, suspended Congress legislator Process T Sawkmie has asked the BJP to take action against Shullai.

In a democracy, everyone has the right to speak but the way Sanbor Shullai misbehaved, it has put the state in an awkward position,” he said.