The C-295MW is a transport aircraft of 5-10 tonne capacity with contemporary technology that will replace the ageing Avro aircraft of IAF. 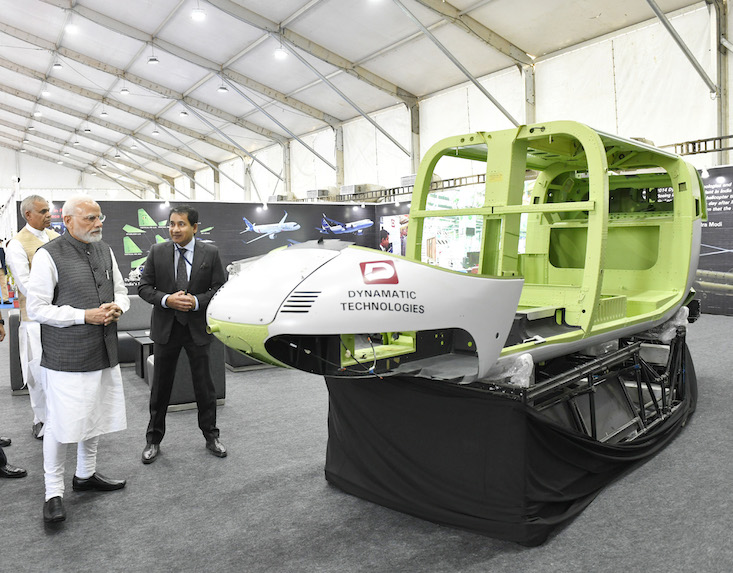 “Today, we are taking a big step to make India the world’s largest manufacturing hub. India is making its own fighter plane today. We are making tanks and submarines… The transport aircraft built here will not only give strength to our forces, it will also develop a new ecosystem for aircraft manufacturing in the country,” the Prime Minister said.

The C-295MW is a transport aircraft of 5-10 tonne capacity with contemporary technology that will replace the ageing Avro aircraft of IAF.

This is the first project of its kind in which a military aircraft will be manufactured in India by a private company, Tata-Airbus consortium.

The Prime Minister said that India will soon witness the passenger aircraft that will be made with the tag of ‘Make In India’.

“It is estimated that In the coming 10-15 years, India will need more than 2000 passenger and cargo aircraft. India is already preparing to meet this big demand,” he said.

By 2025, defence manufacturing would exceed $25 billion, he said.

Modi said that companies from more than 160 countries have invested in all Indian states in the past eight years.

Investment in aerospace sector accounts $3 billion, he added. “Today, India has brought golden opportunity to the world. Despite the situation created by Corona and (Ukraine) war and despite interruptions in the supply-chain, the growth momentum of India’s manufacturing sector is maintained,” the Prime Minister emphasised.

“In the last 8 years, emphasis has been given to Ease of Doing Business which is making India a manufacturing hub,” the Prime Minister added.

“One key aspect of progress is the Change of Mindset. The New India is accelerating its growth due to the government’s consistent commitment to changing mindsets,” the Prime Minister said.

The total cost of the transport aircraft project is Rs 21,935 crore, the Defence Ministry said.

The Vadodara facility will supply eight aircraft per year, officials said. The aircraft can be used for civilian purposes as well.

The first 16 fly-away aircraft are scheduled to be received between September 2023 and August 2025. The first Made in India aircraft is expected from September 2026.

Addressing the gathering, Defence Minister Rajnath Singh said that the C-295 aircraft will have superior capabilities and it will have global standards. This modern transport aircraft will augment the logistical capability of the IAF, he said.

“It is a matter of pride that in all the 56 aircraft, Indigenous Electronic Warfare Suites will be fitted, which will be manufactured by Bharat Electronics Limited, and Bharat Dynamics Limited. Hundreds of MSMEs from across the country will be joining this facility,” the Defence Minister said.

“I am confident that the measures taken by the Defence Ministry to promote domestic manufacturing will not only meet the needs of our Armed Forces but also help India become a net exporter of defence equipment and platforms,” he added.

The Cabinet Committee on Security, in its meeting held on September 08 last year, had approved the procurement of 56 C-295MW transport aircraft from M/s Airbus Defence and Space SA Spain.

Thereafter, Defence Ministry signed a contract with M/s Airbus Defence and Space S.A. for acquisition of the aircraft with associated equipment.

As part of the contract, 16 aircraft will be delivered in flyaway condition and 40 will be manufactured in India by the Indian Aircraft Contractor, TATA Consortium of Tata Advanced Systems Limited (TASL) and Tata Consultancy Services (TCS) led by TASL.

The C-295MW aircraft has a rear ramp door for quick reaction and para dropping of troops and cargo. Short take-off/land from semi-prepared surfaces is another of its features.

The Defence Ministry earlier said that the project offers a unique opportunity for the Indian private sector to enter into technology intensive and highly competitive aviation industry.

It will augment domestic aviation manufacturing resulting in reduced import dependence and expected increase in exports.

Also, 96% of the total man hour work per aircraft that Airbus employs at its manufacturing facility at Spain will be undertaken in India by the TATA Consortium.

Manufacturing of over 13,400 Detail Parts, 4,600 sub-assemblies and all the seven Major Component Assemblies will be undertaken in India, along with tools, jigs and testers.

Various systems such as engines, landing gear, avionics, EW suite etc will be provided by Airbus Defence and Space and integrated on the aircraft by the TATA Consortium.

All 56 aircraft will be fitted with indigenous Electronic Warfare suite of Indian DPSUs – Bharat Electronics Ltd and Bharat Dynamics Limited.

After completion of delivery of 56 aircraft to IAF, M/s Airbus Defence and Space will be allowed to sell the aircraft manufactured in India to civil operators and export to countries which are cleared by the Government of India.