The 230-metre-long (754 feet) bridge was built during British rule in the 19th Century. 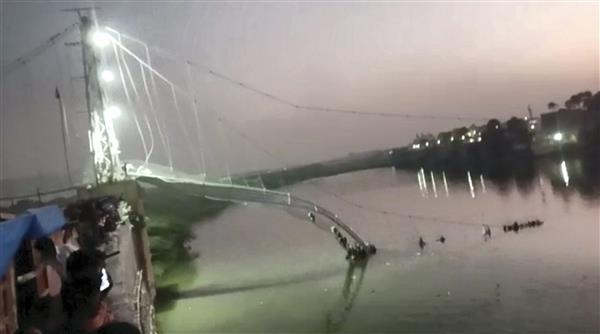 Ahmedabad: At least 60 people were killed and several others injured after a cable bridge collapsed in Gujarat’s Morbi on Sunday evening, official sources said.

Hundreds have been plunged into River Macchu in Morbi town. Local footage shows people hanging off the partly-submerged suspension bridge.

Reports say as many as 400 people were on the structure at the time. Authorities said rescue efforts were under way.

It comes just days after the bridge was reopened following repairs.

The 230-metre-long (754 feet) bridge was built during British rule in the 19th Century. Emergency workers from neighbouring districts have been rushed to the scene to help with rescue efforts.

PM Modi, who is in his home state of Gujarat on a three-day visit, said he was “deeply saddened by the tragedy”. PM has announced compensation for the injured, as well as the next of kin of those who have died.