PM Modi led chants of Har Har Mahadev as he inaugurate the religious corridor in his parliamentary constituency in poll-bound Uttar Pradesh. 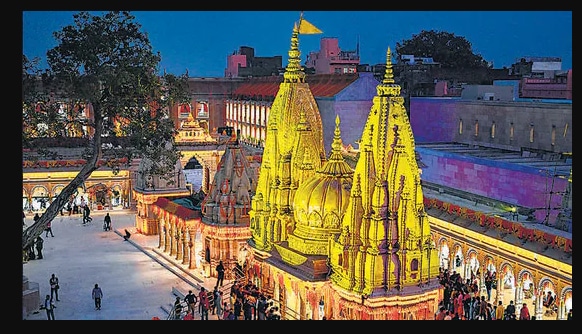 Varanasi: The Kashi Vishwanath Corridor, which restores the lost glory of this ancient temple town as a cultural, spiritual and educational centre, was inaugurated by Prime Minister Narendra Modi on Monday.

PM Modi led chants of Har Har Mahadev as he inaugurate the religious corridor in his parliamentary constituency in poll-bound Uttar Pradesh.

Uttar Pradesh Governor Anandiben Patel and Chief Minister Yogi Adityanath along with seers and other dignitaries attended the grand opening ceremony that started with his landing in the city just ahead of 11 am.

BJP national president JP Nadda was also present on the occasion. Around Rs 800 crore was spent on the project and it was constructed at a record 33-month time.

PM Modi laid the foundation for the project on March 8, 2019, just ahead of the last General Elections.

The total area of the corridor is more than one lakh square feet which has 27 temples and 23 buildings. There are seven entry gates to the Corridor.

An outcome of the Prime Minister’s great vision for Kashi, the corridor, on the one hand, facilitates hassle-free movement of devotees between river Ganga and the temple and on the other hand, paves way for the development of not only Varanasi, but the entire Purvanchal region, enhancing tourism as well as business and trade and creating ample employment opportunities for the youth from the region, a government release said earlier.

The 20-25-feet wide corridor connects Lalita Ghat of the river Ganga to the Mandir Chowk. Prior to the construction of the Kashi Vishwanath Corridor, the temple lacked direct visibility from Ganga and devotees had to go through numerous narrow, dirty and congested lanes to enter the temple, officials here on Sunday said.

Prime Minister Modi’s vision was to transform Kashi into a smart city through the corridor with all facilities for pilgrims and tourists while preserving its rich spiritual and cultural heritage.

The 70 km long Panchkosi route has been given an international look with the beautification of 108 main temples, 44 Dharamshala (shelter homes), kund (pool) and yatri Niwas (guest houses).

The Godowlia multi-level parking lot has been built to accommodate hundreds of vehicles of visitors and tourists while a cruise facility has also been introduced in Ganga to boost tourism. The Prime Minister also took a cruise ride to the ghat ahead of his holy dip.