No US troops to fight in Ukraine

"Nothing has changed about that policy, no one is looking for an armed conflict with Russia here in the United States." 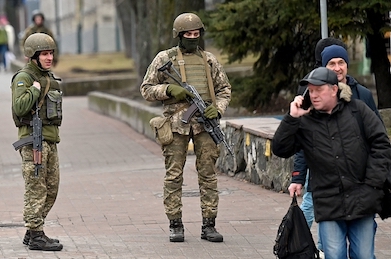 Washington: US President Joe Biden has been exceedingly clear that no American forces will fight in Ukraine, including in the skies over the country, a senior American defense official said on Wednesday.

“The President has been exceedingly clear there will be no US troops fighting in Ukraine, that includes in the skies over Ukraine,” the official said. “Nothing has changed about that policy, no one is looking for an armed conflict with Russia here in the United States.”

The Russian narrative that the United States is using its biological laboratories in Ukraine to develop bioweaponry is “untrue,” a senior American defense official said.

“The Russian narrative that they’ve put out there is that the United States is somehow running or facilitating biological weapons labs in Ukraine and that these labs are going to pose a threat to them. This is a piece of the Russian playbook here to claim there are victims to create a false narrative to try to justify their own aggressive actions. It is absurd, it is laughable, it is untrue,” the official said during a press briefing.