Nagaland Chief Minister Neiphiu Rio stated that 12th March also occupies a stellar place on the timeline of the Freedom movement as it was on this day in 1930, 91 years ago, when the Father of the Nation, Mahatma Gandhi started his most famous, inspiring and epochal, Dandi March from Sabarmati Ashram in Ahmadabad to Dandi 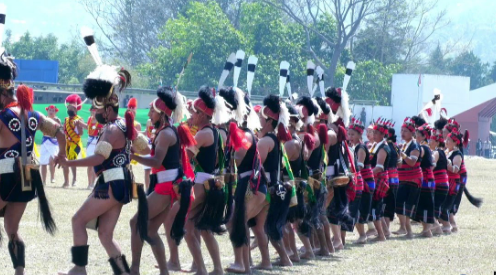 Kohima: Nagaland, along with the rest of the country, today launched the celebration of the 75 years of India’s Independence at Nagaland Civil Secretariat Plaza in Kohima, which started with a march which was flagged off by the Nagaland Principal Secretary for Home Abhijit Sinha, where students of various schools and colleges from Kohima took part in the march, which started at the High School Junction and ended at the Civil Secretariat Plaza.

Nagaland Chief Minister Neiphiu Rio speaking at the function stated that 12th March also occupies a stellar place on the timeline of the Freedom movement as it was on this day in 1930, 91 years ago, when the Father of the Nation, Mahatma Gandhi started his most famous, inspiring and epochal, Dandi March from Sabarmati Ashram in Ahmadabad to Dandi, a coastal village in Gujarat, about 385 kilometers away, which was intended to protest against the nefarious provisions of the salt tax imposed by the British Government. He informed that Prime Minister, Narendra Modi is in Ahmadabad for flagging off the re-enact of the historic Dandi March from Sabarmati Ashram.

Rio said that at the dawn of independence, India had many overwhelming challenges before it. However, over the decades, the Country has been able to deepen and strengthen the democratic processes and foundations in the country, and have brought about significant social and economic equality among the people. He said that Nagaland which came into existence, about 16 years after India’s independence, has also been moving shoulder to shoulder with the rest in order to make all those dreams a reality. He also spoke of the improvements in various sectors such as education, human resources, road, power and health sector.

Rio commented on the substantial progress and achievements by the State and the entire nation urge everyone to put in their effort to achieve their various developmental goals, and ensure that no individual is deprived of his fundamental rights. Rio also mentioned that the State Government is striving for early political solution, a matter intricately linked to our identity and history, and reminded about the life and the message of the father of our nation who always advocated peace, non-violence and purity of means.

In the celebration of the India’s 75 years of Independence ‘AZADI KA AMRUT MAHOTSAV’, cultural presentation of Song and Dance display were also performed by various artists organised by Task Force for Music & Arts and Art & Culture of Nagaland.

A photo exhibition with the theme ‘Celebrating 75 Years of India’s Independence,’ organized by the Field Outreach Bureau, Kohima, Bureau of Outreach & Communication, Ministry of Information and Broadcasting, Government of India was inaugurated by Chief Minister Neiphiu Rio at Nagaland Secretariat Plaza at Kohima today.