It is likely to become more marked during the next 24 hours. 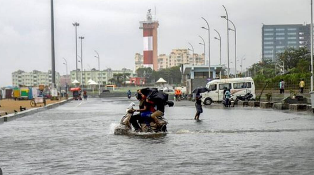 Chennai: As the Low Pressure area over the bayis expected to become well marked, the Met office on Thursdayissued a Red Alert for Chennai and its neighbouring districts for tomorrow, forecasting heavy to very heavy rains and orange alert for the next two days.

It is likely to become more marked during next 24 hours.

Under its influence, heavy rainfall has been forecast over Tamil Nadu, Puducherry and Karaikal.

Isolated extremely heavy rainfall is also likely over North coastal Tamil Nadu, Puducherry and Karaikal for the next two days.

Isolated heavy to very heavy rain with extremely heavy rain at one or two places is likely to occur over Tiruvallur, Ranipet and Kancheepuram districts.

On the impact expected due to extremely heavy/very heavy rainfall at isolated places over Tamil Nadu, Puducherry and Karaikal during November 11 to 13 and over Coastal Andhra Pradesh and Yanam and Rayalaseema for next 48 hrs, the Met office said localized water logging likely in low lying areas in urban areas of the above region.

There will be occasional reduction in visibility due to heavy rainfall and disruption of traffic in major cities due to water logging in roads leading to increased travel time, besides minor damage to kutcha roads and possibility of damage to vulnerable structure, localized landslides and mudslides, damage to horticulture and standing crops in some areas due to inundation.

Squally Weather with wind speed ranging from 40-45 kmph and gusting to 55 kmph is likely to prevail over Southwest and adjoining Westcentral Bay of Bengal, along and off South Andhra Pradesh, TN, Puducherry and Sri Lanka coasts, Gulf of Mannar and adjoining Comorin area for the next two days.

On November 13 and 14, squally weather with wind speed of 40-45 kmph and gusting to 55 kmph is likely over Lakshadweep area, Maldives-Comorin area, Southeast Arabian Sea and alongan off Kerala and adjoining south Tamil Nadu coasts.

Fishermen are advised not to venture in to these areas during these period.