The Chief Minister also handed over Community Investment Funds of Rs. 1.14 Crore to support women Self Help Groups for 44 village organizations. The financial assistance under Yess Meghalaya to youth organizations and piglets and chicks under the ‘Progress’ scheme was also distributed. 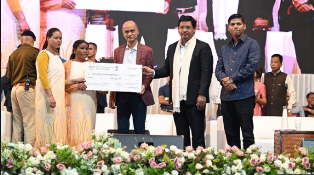 “Our farmers will get almost close to Rs. 500 cr in their accounts every year and if you multiply this by 10 years, it will be Rs. 5000 cr. This money will revolve amongst our farmers, and producer groups in the State and they can decide on the best ways to use the funds,” the Chief Minister said while addressing an event to celebrate the success of the FOCUS programme at Nongstoin, the district headquarters of West Khasi Hills.

Focus and Focus + are flagship initiatives of the Government that provides financial aid and cash benefit of Rs. 5000 each to farmers’ producer groups (PGs) and individuals respectively. Under both programmes, an individual farmer in every rural household across Meghalaya will have a cash benefit of Rs. 10000 each.

During the event, the beneficiaries of Focus, the Producer Groups were given cheques, while beneficiaries of Focus + were given the ‘Focus Card’. The funds under Focus + will be released in instalments to the beneficiaries. Through FOCUS in the district of West Khasi Hills, a total of 1957 PG members households were sanctioned an amount of ₹ 5000 per Household amounting to Rs 62,85,000/- ( Sixty two lakhs and eighty-five thousand) an amount of ₹1000 per household will be released as first instalment and the remaining 4000 as the second instalment.

The Chief Minister also handed over Community Investment Funds of Rs. 1.14 Crore to support women Self Help Groups for 44 village organisations. The financial assistance under Yess Meghalaya to youth organisations and piglets and chicks under the ‘Progress’ scheme was also distributed.

Talking about the SHG movement and its impact on livelihood and income generation, the Chief Minister said that in the last four years the SHG groups have increased from merely 4500 in 2017-18 to about 42000 at present.

“In the past only Rs. 50 cr was disbursed to SHGs across the State but from 2018 till date, despite 2 years of the Covid-19 pandemic, the Government has been able to disburse ₹ 380 cr to different SHGs in the State,” Sangma stressed.

The Chief Minister also informed that under different mission mode programmes for farmers’ welfare, the Government has invested more than Rs 700 cr to support farmers and leverage farming activities.

Through the various mission mode programmes in the past 4.5 years, the Government has worked to bring a turnaround in the different farming sectors. We are working with a vision of doubling farmers’ income and having a maximum impact at the grassroots through these interventions”, he added.