Mamata draws flak for RSS not “that bad” remark

"Basically a got-up game was going on between the Trinamool and the BJP-RSS in the recent past. 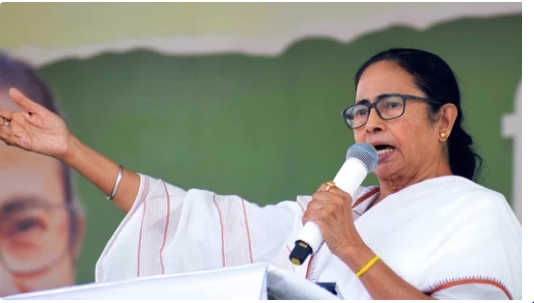 Kolkata: The Congress and the CPI-M on Thursday lashed out against West Bengal Chief Minister Mamata Banerjee for her remark that RSS was not “that bad”.

Terming Banerjee as the “product of the RSS (Rashtriya Swayamsevak Sangh)”, CPI-M Central Committee member Sujan Chakraborty said Banerjee and the right-wing Hundutva outfit both were for long members of the same “mutual appreciation club”.

“In 2003 RSS had called her ‘Devi Durga’ and she had in return called its leaders true patriots,” Chakraborty told UNI.

Chakraborty alleged that the RSS was using Banerjee and her party Trinamool Congress as the “B team of the BJP” to further its “communal agenda”.

“And she is also wilfully playing along,” he said.

Banerjee on Wednesday said there were many “good people” in the RSS who did not support the BJP.

“RSS wasn’t that bad earlier. And I don’t believe RSS is that bad,” she told the media at the state secretariat Nabanna.

“There are many good people in the RSS who don’t support the BJP. All in the RSS are not bad,” she added.

Banerjee’s comments on the RSS generated a political controversy after video clips of her remarks became viral.

Senior Congress leader Abdul Mannan slammed Banerjee, saying she was “unnerved” after the recent arrest of her party leaders Partha Chatterjee and Anubrata Mondal on graft charges and fresh Enforcement Directorate summons to her nephew Abhishek Banerjee in connection with the alleged coal scam.

“Trinamool Congress was born in the womb of the RSS. And this is not the first time that she has praised the organization. But in the recent past she was posing as a secular leader because of the constraints of electoral politics,” Mannan told UNI.

“Basically a got-up game was going on between the Trinamool and the BJP-RSS in the recent past.

“But now after the arrests of her party leaders and summons to her nephew, Mamata has become unnerved. So she is trying to cozy up to the RSS again,” said Mannan, a former leader of the opposition in the West Bengal Assembly.