The team travelled from UAE to Bahrain on October 7, after playing two friendlies against the UAE (4-1) and Tunisia (0-1) in the Emirati nation. 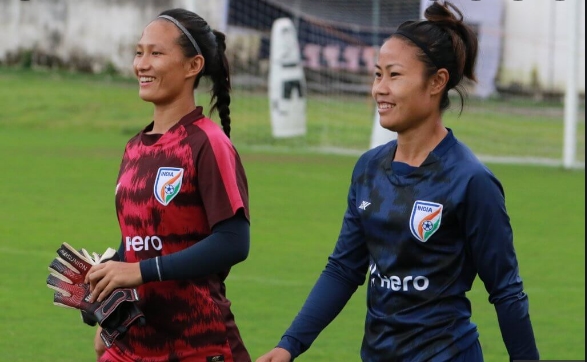 Bahrain: Having moved to Bahrain for their next two friendlies, the Indian Women’s Team is looking to better their understanding of each other’s roles.

The team travelled from UAE to Bahrain on October 7, after playing two friendlies against the UAE (4-1) and Tunisia (0-1) in the Emirati nation.

Head coach, Thomas Dennerby feels that the friendlies that the team is playing are helping the side gain a better understanding of what to do in different situations.

“These friendlies have been very helpful for the girls to understand the individual tasks and roles, and it also showed them how to cooperate together, both in attack and in defence,” Dennerby said on the eve of the match.

India had previously won one and lost another game in UAE, something that Dennerby himself is wary of.

“We need to be 100 per cent focused every single minute of every game. We must stop conceding easy goals and definitely score when we have open chances,” he continued.

“But we have a good feeling amongst ourselves. We had a very good interactive meeting after the Tunisia game, and everyone learned a lot,” informed Dennerby. “I think all the players are now aware that a better team can lose if they do not focus on the scoring situations.”

Captain Ashalata Devi believes that the team is gaining a lot in terms of getting telemetry of where the side stands as they prepare for the AFC Women’s Asian Cup.

“These friendlies have been very helpful to us. We have won one game and lost another, but the learnings taken from them are immense. The fact that we are getting to play against tough international sides will give us a good reading of where we stand at the moment,” she said.

“We have Bahrain up next, and our aim, like always, is to win the match. The girls are all motivated and ready to give 100 per cent against Bahrain.”