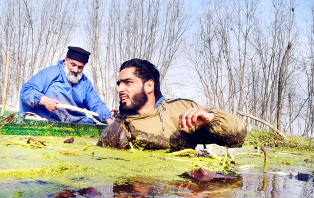 Srinagar: Mohammad Shafi Rather spends hours in freezing temperatures in the waters of Anchar Lake extracting Lotus stems just to eke out a livelihood to feed his family.

Holding a small boat on the one hand to balance himself and plucking the Lotus stems down the water in the lake with the other, collecting, cleaning and making bunches to sell them in the market.

Lotus stem, locally known as “Nadru”, is a popular vegetable traditionally being used for preparing a variety of dishes by every household in Kashmir valley on special occasions. Lotus root is an underwater root vegetable, creamy white in color with porous structure, and has a shape resembling a long stick over 4 feet.

Shafi, who could not continue his studies beyond 10th standard due to family issues and poverty, has been doing this business for the past more than 15 years.

“My father died when I was in 7th standard and my uncle forced me to get married so that mother could be helped in the household affairs and then I started going to the lake to extract Lotus stems for sale,” Shafi told UNI.

Lotus is a herbaceous perennial aquatic plant which belongs to the Nelumbonaceae family. Lotus stem, locally known as “Nadru” in Kashmir and “Kamal Kakdi ‘ in India, is one of the novelties of Kashmir valley. It grows in shallow parts of water bodies like Dal Lake, Wular Lake, Mansar Lake, Anchar Lake and ponds in the valley.

The lotus stem, although an expensive delicacy, is much loved in Kashmir and is used in many Kashmiri dishes. In most of the Asian countries, almost every part of this plant is consumed, but here in the valley, only the stem and its seed are in demand.

“Selling Lotus Stem is my sole source of livelihood to feed my family. It is a good business and has nutritional elements too,” Shafi said.

Shafi said that the floating Lotus Stem garden needs care throughout the year, especially during the summer season. The water of the area should remain as clean as possible. He said the algae and rotten leaves had to be removed from the area till September every year which helps the stem to grow properly during the period.

He said the floating area has to be left unwatched from September to October to allow it to grow. The water body with lotus flowers and broad leaves represents a mesmerizing view of nature that also lures a lot of tourists to visit these floating places.

He said that the cultivation of Lotus begins from October throughout the winter season.

Shafi said that during the cold weather conditions one has to go down under water with an empty stomach to remain active while extracting the Lotus stems.

“As the cultivation of Lotus is a very tough and difficult job, the price of the stem could have been much higher than what we are getting at present,” Shafi said. He said he sells a bunch of Lotus stems for Rs 200 to Rs 350.

A number of delicacies are prepared with it in Kashmir, like chips, cutlet, a popular fritter-like street food called (nader-monje).

“Nadruyakhni” is prepared as a special dish on Nowruz, the Iranian New Year, it is cooked along with fish, which forms a traditional dish of the valley and it is cooked with moong dal, one of the highlights of Kashmiri cuisine. 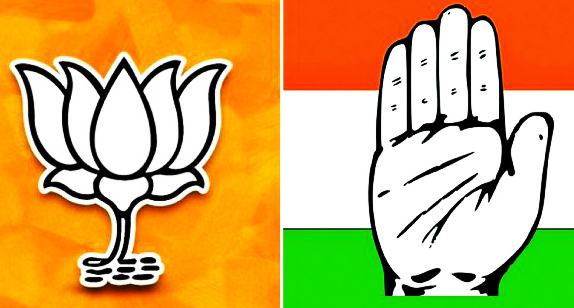