Go to Village 2.0 was organized Tuesday at Jiri College Campus of Jiribam District with Chief Minister N. Biren Singh as the chief guest. Around 50 stalls of 26 different government departments and banks were opened for the convenience of the public. 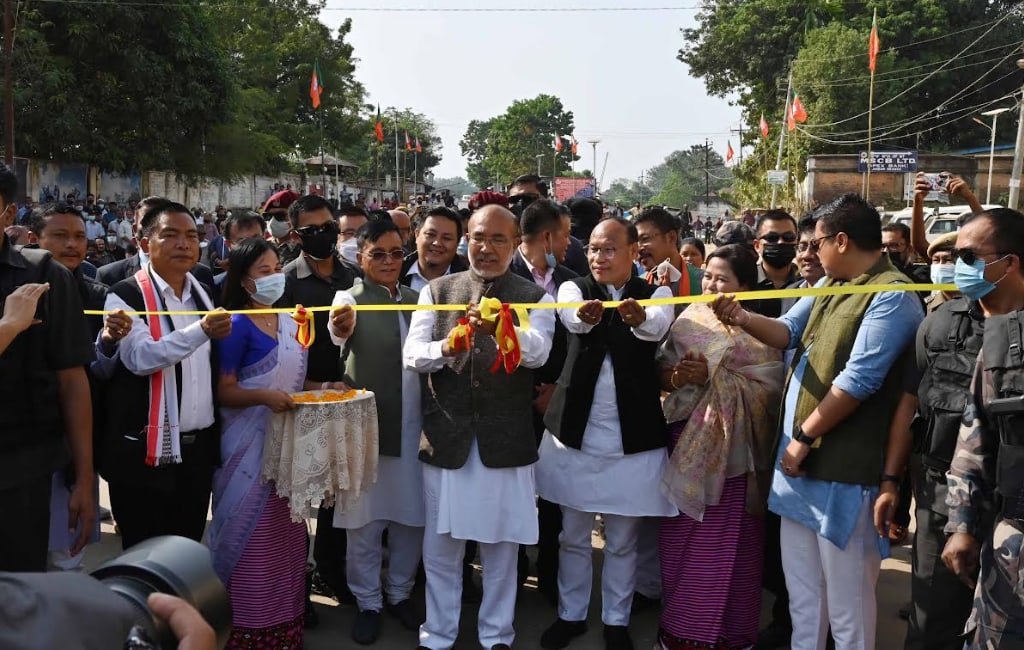 Imphal: Go to Village 2.0 was organized Tuesday at Jiri College Campus of Jiribam District with Chief Minister N. Biren Singh as the chief guest. Around 50 stalls of 26 different government departments and banks were opened for the convenience of the public.

During his visit to the district located at the western fringe of the state bordering Assam, N Biren Singh also inaugurated Nongshaba Thong (Western Gate of Manipur) besides dedicating a bailey suspension bridge to the public through video conference. The bridge was constructed over Barak River at Tipaimukh to connect Taithu and Paiphunmuan (Pherzawl District) at an estimated cost Rs. 706 lakhs.

Speaking at the occasion, the Chief Minister expressed resentment over not completing construction of Jiri College road despite the issuance of the work order worth Rs. 50 lakhs to the work agency concerned long time back. The Chief Minister cautioned all the concerned that they would face the music if construction works are not completed within 20 days. He also expressed his extreme anger for not issuing work order for the construction of Jiri-Tipaimukh road worth Rs.114 crore.

Informing that the foundation stone for Nongshaba Thong was laid a long time back, the Chief Minister expressed dissatisfaction over not taking up tangible steps for its construction by successive governments for a long period of time. If such delays continue, the district would never achieve progress, he observed. However, Jiribam has started witnessing fast development after the coming of the present government, stating that key development works like Ima Market, Helipad, Sadbhavna Mandap, Residential Model School, Transit Accommodation had been completed in a record time.

Mentioning the importance of a modern check post building at the entry point to the state on NH-37, the Chief Minister asked the Deputy Commissioner of the district to submit the DPR within seven days, assuring that the check post would be constructed at the earliest with any available funds. The Chief Minister further announced that a new Ima Market of the district would also be constructed in addition to the existing one. He also said that the District Transport Office would also be inaugurated virtually within a few days. Shri N. Biren Singh also said that he would look into possibilities of constructing a work-shed of Agarwood products as demanded by the people of Jiribam.

Stating that the present government never ignores Jiribam in bringing development, he asked the people of the district not to feel neglected due to its location. He assured them that he would do whatever possible to have all the necessary infrastructures and Government offices of a full-fledged district including DRDA.

Regarding Go to Village, the Chief Minister said that it is a sincere effort to bring people closer to the government. With the introduction of the mission, Government Benefits are delivered to people’s doorsteps now, he said. The Chief Minister also mentioned the benefits provided under different noble schemes introduced by the present Government like CMHT, CMST, School Fagathansi, etc., thereby expressing hope that people would be able to maintain savings as these schemes would save them from spending huge amounts of money on medical treatment and children’s education.