He is the first Assamese to win an election from behind the bars. 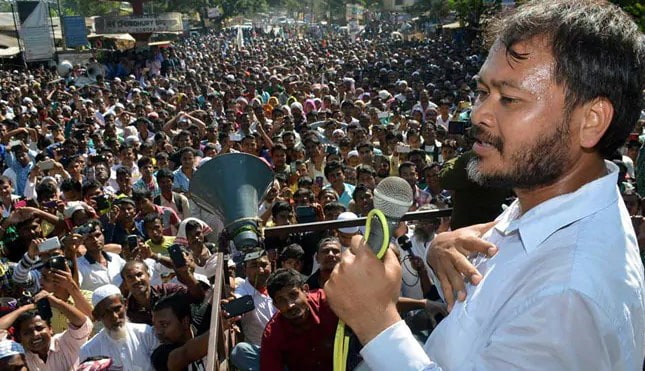 Guwahati: Jailed anti-citizenship amendment act activist Akhil Gogoi received permission from a special NIA court to take oath as legislator of Assam Assembly on Tuesday. He is the first Assamese to win an election from behind the bars.

Special NIA Judge Pranjal Das hearing a petition by Akhil Gogoi, the Raijor Dal chief, granted him the permission for taking oath as a legislator at the Assam Assembly complex.

“This is not a bail. Akhil Gogoi has been granted permission only to attend the oath taking ceremony. He has to return to judicial custody again,” his advocate Santanu Borthakur said.

Akhil Gogoi, lodged in jail after arrest by NIA for alleged sedition and terror charges, had defeated BJP’s Surabhi Rajkonwari by a convincig 11,875 votes in Sibsagar seat in the recently held Assam Assembly polls.

Akhil Gogoi, who contested as Independent, became the first Assamese to win an election from behind the bars. His victory has been hailed as the “most spectacular” after that of former union minister George Fernandes, who won the 1977 Lok Sabha election by over three lakh votes from Muzaffarpur in Bihar while being in jail since June 1976 during Emergency.

The National Investigation Agency (NIA) had arrested the Raijor Dal chief in December 2019 for his alleged role in violent protests against the controversial Citizenship (Amendment) Act across the state.

Akhil Gogoi was admitted to Gauhati Medical College and Hospital (GMCH) in 2020 for treating COVID-19 and he remains there for other ailments.

On April 14, Gauhati High Court had upheld the bail order of Akhil Gogoi by a Special NIA Court by dismissing an appeal by the NIA. It had said that any act aimed at creating civil disturbance would not come within the purview of the Unlawful Activities (Prevention) Act, 1967 unless committed with the requisite intention.

Akhil Gogoi is still in judicial custody as he was rejected bail in another case related to anti-CAA violence which is being investigated by the NIA.