Pakistan and India are pooled in with Bangladesh, South Africa, and two qualifiers of Round 1, who can provide elbow room if they are to reach the semifinals. 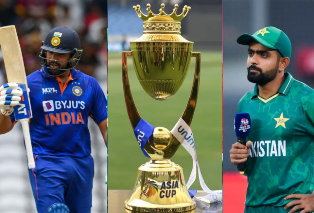 Melbourne: Amidst the verbal sparring between the two neighbouring countries regarding next year’s Asia Cup, India and Pakistan are set to face off in their ICC Men’s T20 World Cup 2022 opener at MCG here on Sunday.

Crazy excitement is building up ahead of the match that will have huge implications for the outcome of Group 2 of the Super 12 stage.

Pakistan and India are pooled in with Bangladesh, South Africa, and two qualifiers of Round 1, who can provide elbow room if they are to reach the semifinals.

The last T20 World Cup faceoff between these Asia giants gave stunning drama and caused fatal damage to India’s chances of making it to the final four.

But it has not been a one-sided affair in recent years. There has been a see-saw battle between the two nations.

A couple of matches have gone down to the wire. This has further added to the excitement between the India-Pakistan match.

These headlines have heated up the passions of their respective fans who are keenly awaiting the Sunday clash and the outcome thereof in the mega event.

Even the players are eager to register a victory early on to gain control which always plays an important role for any team in a tournament.

The Indian batting consists of KL Rahul, Captain Rohit Sharma, Virat Kohli, and Suryakumar Yadav, who have the ability to chase down any damn target on a given day.

The Indian bowlers have been struggling in death overs in the absence of Jasprit Bumrah who is not playing due to injury. India still has the firepower with experienced Bhuvaneshwar Kumar and Mohammad Shami, who can be lethal in lively and bouncy tracks, and young Arshdeep Singh can provide them with a left-handed variety.

Pakistan boasts of Babar Azam and Mohammad Rizwan, who are the two best batsmen in the tournament, and they would go out and perform to show the world how good they are. Fortunately for Pakistan, they are in great form and their teammates would like them to deliver against India, their greatest rivals.

But if the openers go back into the dugout early on, Pakistan will be in a spot of bother because they drop away in the middle order, given India boasts of a deep bowling attack, which has the potential to fill the gap left vacant by Bumrah.

However, in the recently concluded tri-series in New Zealand, a few of the middle-order batsmen have chipped in. It remains to see whether they can hit the purple patch.

Pakistan’s bowling lineup is stacked up with acclaimed bowlers like Shaheen Shah Afridi who devastated the Indian top order in the last T20 World Cup.

Harris Rauf would look to rip through the Indian top order and fire their fans up, considering his love to bowl at the MCH given his history with the Melbourne Star.

India has locked horns with Pakistan in 11 T20I games out of which they have won eight games.

Pakistan, on the flip side, has won just 3 games including their 10-wicket win against India last year and their 5-wicket win in Asia Cup in the penultimate ball.

In the T20 World Cup, both nations played each other in 6 games. India has emerged victorious in 5 games, while Pakistan won just one.

Tomorrow, India would eye to win their 7th game and Pakistan their second in T20 World Cup tournaments. Looking at the two sides, India might have an edge by having a balanced team in contrast to Pakistan’s underperforming middle order.

Come Sunday, the result of the mega match would further flare up the passion and animosity in the midst of the India-Pakistan spar over the Asia Cup, and that’s for sure. So, get ready with your snacks up on your tables and watch the greatest rivalry unfold while you munch away the crunchies at your leisure.