The state will take up 22 e-Governance projects to commemorate the year. 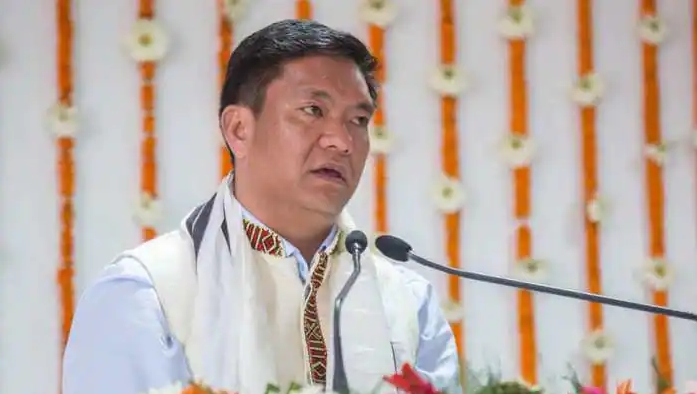 Itanagar: In a bid to ensure last-mile delivery of healthcare services with the help of technology in the spirit of PM Narendra Modi’s mantra of ‘Sabka Saath, Sabka Vikas’, Arunachal Pradesh Chief Minister Pema Khandu on Monday announced the launch of ‘Medicine from the Sky’ program to deliver medicines and vaccines in far-flung areas of the state.

‘In a first-of-its-kind initiative, drones will be used in health supply chains to deliver vaccines and medicines to distant places, in collaboration with the World Economic Forum. The ‘Medicine from the Sky’ program was launched today morning, with the first sortie of medicines delivered in East Kameng district,” said Khandu while addressing a huge gathering on the occasion of Independence Day in Itanagar.

He announced another new initiative, ‘Chief Minister Health Emergency Life Protection Service (CM-HELPS), under which government will work for upgradation of the health infrastructure for transforming the ‘Casualty Rooms’ in all General and District Hospitals into state-of-the-art ‘Emergency Care Centers’ to provide quality, accessible and affordable emergency care.

To tackle the ‘growing’ menace of drug addiction in the state, Khandu said, “Government will establish three state-of-the-art treatment and rehabilitation centers at Namsai, Itanagar, and Bomdila in addition to significantly increasing the allocation of ‘Chief Minister’s Nasha Mukti Abhiyan’ from Rs 4 crore to Rs 15 crore.”

To boost the air connectivity sector, the Chief Minister said, “In addition to existing 6 ALGs (Advanced Landing Grounds), we are working with the Central Government to establish three more airports in Arunachal Pradesh – one at Dirang in West kameng, second at Anini in Dibang Valley and the third in Upper Subansiri district.”

Informing that the 1600-km Trans Arunachal Highway is nearing completion, Khandu reiterated the significance of building an 1800-km-long Frontier Highway to connect the remotest upper reaches along the border. Regarding the East-West Corridor, he said the state government is ready to complete pre-construction activities including a techno-economic feasibility study and preparation of DPRs from its own resources.

On the hydropower front, the Chief Minister said that the work on the 2,880 MW Dibang Multipurpose Project will commence very soon. He thanked the people of Dibang Valley and Lower Dibang Valley districts for “resolving the long-pending land acquisition matter thereby paving the way for the investment of Rs 30,000-40,000 crore in this area.”

He also said that the Arunachal government was working with the government of India to realize the Hydrocarbon Vision 2030 for North East by facilitating exploration and production activities in the state.

“Itanagar will be connected to the gas grid through the North East Gas Grid (NEGG) project shortly. This will facilitate the supply of LPG through the pipeline in every household and will be a major step forward towards Ease of Living,” he said.

While mentioning that Arunachal Pradesh has been a pioneer in adopting e-Governance modules, Khandu said, “Based on previous successes, State Government has decided to observe the year 2022-23 as Year of e-Governance.

The state will take up 22 e-Governance projects to commemorate the year. These projects covering Government-to-Government and Government-to-Citizen interfaces, once implemented, would bring in total quality management in governance,” he said.

“Let us resolve and reiterate our duty to strive for a peaceful, vibrant, and prosperous Arunachal Pradesh that takes all the members of the state into its fold,” Khandu appealed before concluding his address.

Earlier, the Chief Minister hoisted the Tricolour amid the playing of the National Anthem and released tricolored balloons in the sky before inspecting the parade in an open jeep escorted by DGP Satish Golcha and taking salute from marching contingents of police and paramilitary forces, NCC cadets, and school children.