The PSI Director said Moon on November 19 is farther away from Earth. Being Farther away, the moon will travel slower along its orbit than at Perigee causing the longest eclipse. 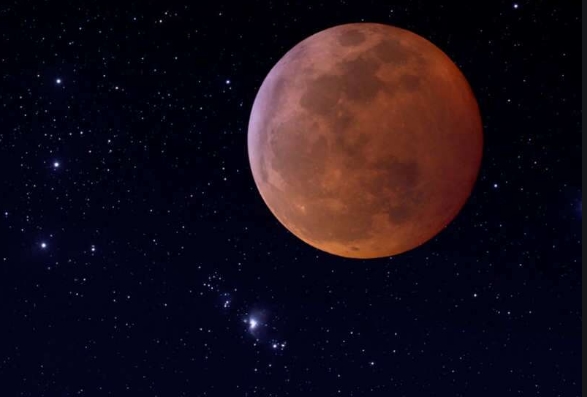 Hyderabad: The second and last partial Lunar Eclipse of 2021 will be visible in India on Friday.

Across the world, this eclipse will be visible in the region covering Western Africa, Western Europe, North America, South America, Asia, Australasia, the Atlantic Ocean and the Pacific Ocean.

Planetary Society of India (PSI) Director N Sri Raghunandan Kumar told UNI on Thursday that this eclipse in various phases begins at 11.30 am tomorrow and ends at 5.35 p.m. The noticeable Umbral phase begins at 12.48 hours and is completed at 4.17 p.m.

Though astronomically speaking, Kumar said, the Eclipse begins at 11.30 am. with the moon entering the lighter Shadow of Earth called Penumbra and ends at 5.35 p.m leaving Penumbra.

People across the world noticeably would witness darkening (or leaving) of Moon’s disk by Earth Shadow in Umbral phase between 12.48 hours to 4.17 p.m. that is 3 hours 28 Minutes and 23 Seconds.

He said It’s a fact that a Lunar Eclipse occurs when the Moon passes through the shadow of Earth. On November 21, at 7.42 a.m. moon will reach the farthest point in its orbit called Apogee. So Eclipse of the Moon on November 19 occurs 41 hours before Earth reaches Apogee.

The PSI Director said Moon on November 19 is farther away from Earth. Being Farther away, the moon will travel slower along its orbit than at Perigee causing the longest eclipse. In other words, Moon reaching the apogee point takes longer to pass through Earth’s shadow making the Partial Eclipse of the Moon on Friday as longest.

An eclipse occurs in India. Visibility only in a few parts of Assam & Arunachal Pradesh?

The moon rises around 4.24 p.m. in Assam & Arunachal Pradesh whereas the rest of the country Moon rises late. For example like most of the states, Moon Rises at 5.43 p.m. in Hyderabad tomorrow, though the Eclipse of the Moon will occur in India. As Moon is not above the horizon during the time of the eclipse, most of the people across India will miss observing it, he explained.

Explaining about Lunar Eclipse, he said a Lunar Eclipse occurs when the earth in course of its orbit around the sun, comes between moon and sun in such a way that the moon is hidden in the shadow cast by earth. This can occur only when the Sun, Earth, and Moon are aligned in a straight line. Hence lunar eclipse occurs only when there is a full moon.

In the recent past, social media is calling Full Moon & allied events with different names. For example, Full Moon on November 19, 2021 is Beaver Moon. It’s a fact that across the world different folklore names full Moon with different names every month. These Folklore names are based on seasons or astrological reasons. However scientifically speaking, the natural Satellite of Earth as per the International Astronomical Union (IAU) has only one name that is Moon, he added.