His apology from the 'bottom of the heart' comes a day after Palaniswami turned emotional and shed tears after the remarks made by the DMK Deputy General Secretary went viral, and protests by the ruling AIADMK prompting the police to file cases against him in Chennai 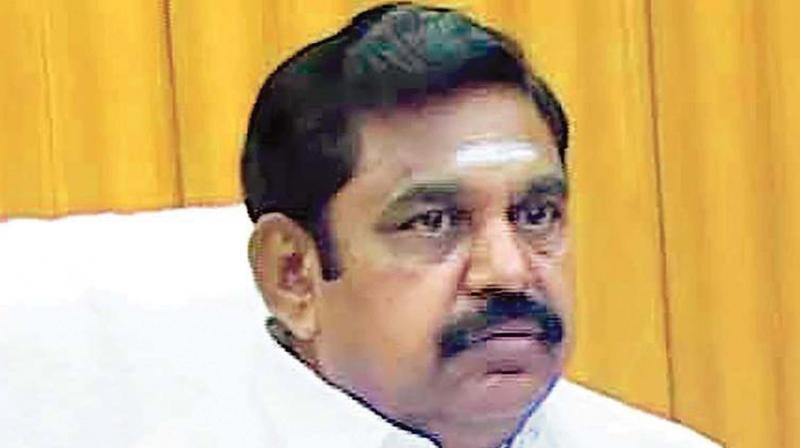 Chennai: With his derogatory, uncivilised, and uncultured remarks about Tamil Nadu Chief Minister Edappadi K Palaniswami’s birth snowballing into a major row that might even cost the Opposition DMK heavily in the April 6 Assembly polls, DMK MP and former Union Minister A Raja, tendered an open apology to the CM on Monday.

His apology from the ‘bottom of the heart’ comes a day after Palaniswami turned emotional and shed tears after the remarks made by the DMK Deputy General Secretary went viral, and protests by the ruling AIADMK prompting the police to file cases against him in Chennai and Ariyalur on a complaint filed by the AIADMK to Chief Electoral Officer Satyabrata Sahoo.

While campaigning in Thousand Lights constituency in the city, Raja, who was cited as one of the accused in the 2G spectrum scandal, apologised for his disparaging remarks that the CM was born out of illegitimate birth, while comparing him with his party Chief M K Stalin.

Raja had said that if Stalin is someone who was born out of a ‘rightful’ marriage, Palaniswami, who no one knew until late leader J Jayalalithaa’s death and has not reached any heights in public life, was a premature baby born out of an illicit affair.

Last evening, Palaniswami, while campaigning, turned emotional during campaigning and said, “If a Chief Minister is disrespected in such a way then imagine will happen to a common man if such people come to power.”

“The statement is not only against his mother, but every mother, and the people who speak in a derogatory manner about women and motherhood must be taught a lesson”, he said, in the presence of large number of women.

In a veiled reference to Raja’s remarks, Stalin, without condemning his party MP, issued a general statement asking the party members to maintain decorum while making speeches as people were trying to distort them for their gains.

Stating that he was pained by the Chief Minister moving to tears following his remarks, which he still maintain was distorted and twisted, Raja said, “I feel deeply distressed after learning that Palaniswami felt hurt by my statement.”

”I share my penitence from the bottom of my heart for my statement that was wrongly conceived”, he said, talking to the media. ”I even apologise to the Tamil Nadu Chief MInister if he is truly hurt, by putting aside the politics, and I don’t hesitate to say this. My speech was not about the personal comparison of two leaders, but a comparison of the two leaders in public life”, Raja said.

Raja’s apology comes a day after the Central Crime Branch of the Chennai City Police filed a case against him for his remarks against the Chief Minister, amid outrageous protests by AIADMK, who had burnt the effigies of Raja, berated it with chappals (alluding to his comment–Stalin’s slippers are costlier by one rupee to the CM’s—and demanded his arrested.

Chennai City Police Commissioner Mahesh Kumar Aggarwal said cases were registered under three Sections of the IPC and under provisions of Representation of the People’s Act, 1951 after the CEO forwarded the complaint filed by the AIADMK demanding action, besides debarring him from campaigning.

The DMK MP was booked under three sections including Sec 294 of the IPC. In a related development, the Keezhapalur police also filed a case against Raja for his derogatory remarks against the Chief Minister and his late mother at an election meeting held at Keezhapalur a few days ago.z

Acting on a complaint by the Village Administrative Officer of Keezhapalur, Raja was booked under Secs 153 (provocative speech with an intent to cause riot), 294-B (uttering obscene words) of the IPC and under Sec 127(1) (inciting others to act in a disorderly manner) of the Representation of the People Act 1951.

A similar case has also been filed against Raja by the Meensuritti police based on a complaint of the VAO of Meensuritti in the district.