"Your enthusiasm is proof that in the remaining phases in Uttar Pradesh, only the BJP flag will triumph. The last election's record has to be broken," he told an election rally here. 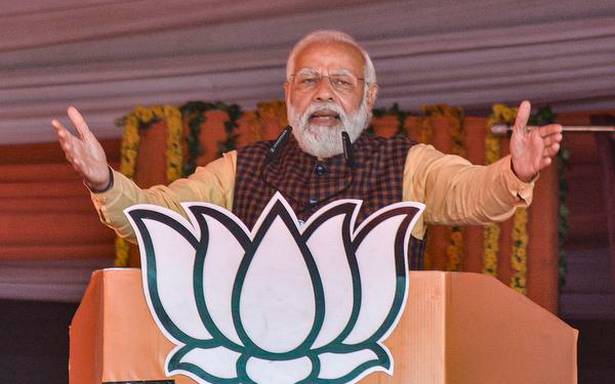 Sitapur (Uttar Pradesh): Prime Minister Narendra Modi on Wednesday asserted that only the BJP can keep riots, mafia and thuggery under control in Uttar Pradesh and give people the freedom to celebrate their festivals.

“Your enthusiasm is proof that in the remaining phases in Uttar Pradesh, only the BJP flag will triumph. The last election’s record has to be broken,” he told an election rally here.

The Prime Minister said the Bharaiya Janata Party (BJP) was committed to protect women from criminals and work for the poor. Modi said he had the privilege of visiting the Ravidas temple in Delhi earlier in the day.

“It is believed that once when Guru Ravidasji was going to Rajasthan, he rested at that place in Delhi. I am fortunate I am an MP from Kashi where Sant Ravidasji was born. The sacred beautification work of his temple complex in Banaras can be done.

“You know that the whole world is in the grip of epidemic for the last two years. Even in the pandemic, the BJP government gave priority to saving the lives of the poor,” he said.

After reciting a couplet of Sant Ravidas, he said: “I want a rule where everyone should get food, society should live in harmony… Every grain of the poor people’s ration, which the mafia looted earlier, is reaching the poor today.” “Friends, during corona, the government took care of the poor. The vaccination programme of earlier governments did not reach the villages. Today, there is a BJP government. It is providing free vaccines to the poor.”