The Governor urged the Kalyan Ashram and other people to take forward the lessons from the life history of Birsa Munda to each and everybody citizen of the country. 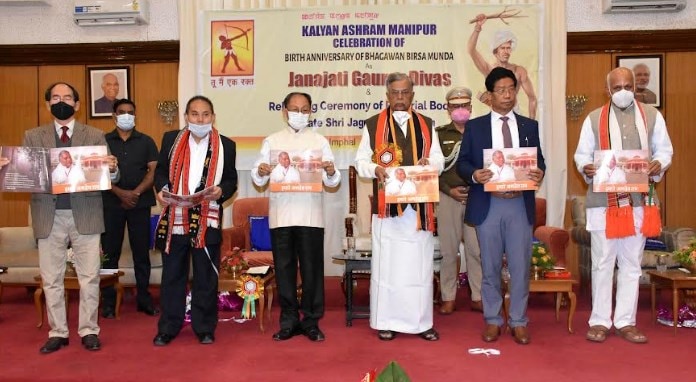 Imphal: The birth anniversary celebration of the legendary leader of tribals, Bhagawan Birsa Munda is indeed commendable and praiseworthy. This was stated by Governor La. Ganesan at the celebration of “Janajati Gaurav Divas” commemorating the birth anniversary of Bhagawan Birsa Munda Sunday at Banquet Hall of Raj Bhavan,  Imphal. A pictorial book on Late Jagadevram Oraon was also released on the occasion.

Addressing the gathering as chief guest, Governor La. Ganesan said that the anniversary of such a legendary leader should be observed on a regular basis so that people of far-flung areas of our country are well aware of it. Bhagawan Birsa Munda, a revered tribal freedom fighter, popularly known as Dharti Aaba did not live very long but he wrote a complete history for the country and gave direction to the future generations of India. He fought against the ideology that wanted to erase the identity of the tribal society of India. He was always in favour of modern education, advocated for change and showed courage to speak against the shortcomings of his own society.

Governor further said that Bhagawan Birsa Munda demonstrated to the nation the way tribals struggled to protect their forests, land rights, their culture and showed their valour and sacrifices, which is vital for nation-building.

The Prime Minister led the country in celebrations by inaugurating the museum in Ranchi in memory of Bhagawan Birsa Munda. A 25 feet tall statue was inaugurated at the Old Central Jail in Ranchi where Munda breathed his last. In 1989 his portrait was unveiled at the Parliament. A constructive genius, he made the Munda people unite for their political emancipation and infused in them the spirit of nationalism. Again in 1998 the President of India inaugurated 14 feet tall statue of Munda outside the Parliament House building.

The people of India should take inspiration from the legacy of Bhagawan Birsa Munda to design policies of welfare governance, to take the administration effectively to most common citizens, to secure the identity and life of people without compromising on the sovereignty of the country.

The Governor asserted that the most glaring fact of these movements and struggles was that the British rule was never welcomed in any janajati of the country. The janajati tribes were never absolutely isolated from regions and the people of the country. Every group, however, small it may be, is celebrating its lifestyle with fervour and feelings. Our country has this great tradition of celebration of diversity. Let us pledge to restore the glory of our heritage and meet the challenges of the modern world.

Birsa Munda was born on November 15, 1875, and died in Jail on June 9, 1900. His life was of 25 years only but he left behind a legacy that is of enormous significance for generations.

The Governor urged the Kalyan Ashram and other people to take forward the lessons from the life history of Birsa Munda to each and everybody citizen of the country. The celebration should be organized either by the Government or some organization in all the states of the country so that they are aware of the great sacrifices of Birsa Munda.

As part of the celebration, Kom, Chiru and Tarao folksongs were presented along with indigenous musical instruments. The celebration was organized by Kalyan Ashram Manipur.

Active cases come down to three in Manipur Tuesday