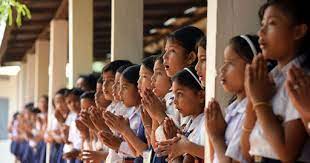 Guwahati: Assam Chief Minister Himanta Biswa Sarma Saturday said that his government will gradually enforce a ‘population control’ policy and people with more than two children will not be eligible to avail the select state government welfare schemes.

Sarma said that the BJP led government in Assam has decided to implement population control norms in select schemes of the state government.

However, the norms would not apply to all the government schemes.

“We can’t implement two-child norms in free admission of children to schools or Pradhan Mantri Awas Yojana. But if we start a CM Awas Yojana, then this point may be applied,” he said.

After assuming office last month Sarma is batting for a two-child norm for using benefits under the government schemes.

Sarma had urged the minority community to adopt a ”decent family planning policy” for population control to reduce poverty, which leads to shrinking of living space and consequent land encroachment.

He had also blamed the immigrant Muslim community for having large families, drawing sharp reactions from various quarters, including the AIUDF having a strong base in the community.

Assam presently has a two-child norm along with requirements of minimum educational qualifications and functional sanitary toilets for contesting in panchayat polls as per an amendment in 2018 to the Assam Panchayat Act,1994.