As per the ECI guidelines that voters will be allowed to exercise their franchise once they get into the campus of the polling station. 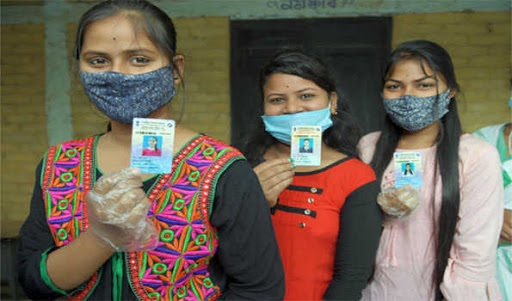 Guwahati: Assam recorded a voter turnout of 78.94 per cent till 6 pm the stipulated time of the polling for the last and final phase of the elections in the state.

However, the long queues were still witnessed in many polling stations, where voting is underway.

As per the ECI guidelines that voters will be allowed to exercise their franchise once they get into the campus of the polling station.

In the last phase, 40 assembly segments went into polls in 12 districts of Assam including the capital town of Assam Guwahati.

Voting for the third and final phase of Assam elections commenced at 7 am with voters queuing up many polling centres to cast their votes at the crack of the dawn.

A total of 79, 19,641 voters will decide the fate of 337 candidates in the 40 assembly segments spread over the 12 districts in Lower Assam.

Four constituencies of the capital town Guwahati is also going to polls in the final phase of elections. There are six seats reserved for STs and two for SCs.

There are 25 women candidates in the fray.

The constituency having the highest number of electors in Phase-3 is Dispur with 607 polling booths having 4, 11,636 electors.

The constituency having the lowest number of electors in Phase-III is Chapaguri in Baksa with 236 polling stations having 1, 59,257 voters.

The fate of many politicians including BJP’ star campaigner Himanta Biswa Sarma who is contesting from Jalukbari will get sealed in the ballot box.

The fate of 20 sitting MLAs, including eight from the Congress, five from the BJP, three each from the AIUDF and BPF and one from AGP, will be decided in the final phase.