Two women from Tamil Nadu and a man from Manipur were also arrested who offered Bey a huge bribe to let them go. 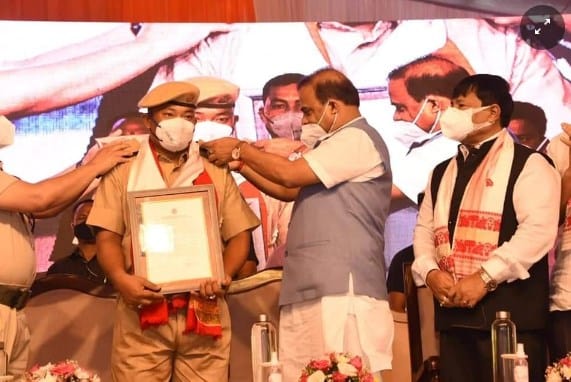 Guwahati: Assam Chief Minister Himanta Biswa Sarma on Saturday appointed a home guard as a police constable for his role in helping the police recover contraband worth crores.

Borsing Bey (35), hit the headlines on June 21 when he refused to take bribes from drug dealers and helped the police seize 3 kg of high-grade crystal methamphetamine worth Rs 12 crore, the India Today reported.

The chief minister congratulated and handed over the appointment letter to Bey on Saturday and said that “the Assam government will continue to recognise such acts of honesty, integrity and bravery”.

“The exemplary show of honesty and integrity of Borsing Bey will continue to inspire the rank and file of Assam police. The government decided to ceremonially hand over the appointment letter to Bey to send a positive message to society. Society has a moral duty to safeguard the younger generation from the menace of drugs,” Sarma said.

The Assam Police is leading the war on drugs from the front over the past couple of months and in the last 45 days, drugs worth Rs 135 crore have been seized from different parts of the state.

Sarma said that Assam was earlier used as a transit route by drug dealers. “That is why the Assam government has given top priority to weed out the menace of drugs from the state so that the new generation could be saved from its ill effects. The state government has intensified its operation against cattle smuggling and crimes against women and children and successfully busted many rackets. Several initiatives for strengthening Assam Police as well as improving facilities for them have been initiated including medical reimbursement, annual health check, housing etc,” he further said.

Assam DGP Bhaskar Jyoti Mahanta had rewarded Bey, who is attached to Dillai police station in Karbi Anglong district, with a cheque of Rs 1 lakh after he helped the police in the drug operation.

According to the reports, police on June 21 had stopped a super bus coming from Manipur, at the check gate under Dillai police station of Karbi Anglong district at night. Bey, who was part of the police team, recovered 3 kg of methamphetamine tablets from the vehicle.

While the drug peddlers offered a huge bribe amount to him, Bey refused to accept it.

Later, two women from Tamil Nadu and a man from Manipur were also arrested who offered Bey a huge bribe to let them go.