The exact cause of death, however, will be clear following the arrival of the post mortem report, and submission of details by the committee, the minister said. 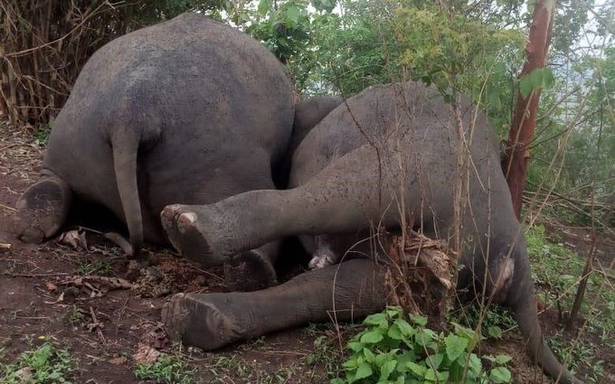 Guwahati: Assam forest minister Parimal Suklabaidya on Friday visited Bamuni Pahar in Nagaon district, where 18 elephant died a day ago presumably due to lightning, and ordered an inquiry into the incident.

A panel, headed by Deputy Conservator of Forest K K Deori with seven veterinarians as members, has been instituted to carry out the inquiry, and file a preliminary report within three days and a detailed account in the next 15 days, an official release stated.

Suklabaidya, who assessed the situation at Bamuni Pahar in Kothiatuli forest range along with top officials, said “no visible sign of any struggle” was found at the site and an initial probe into the incident suggested that the pachyderms were struck by lightning, the PTI reported.

The exact cause of death, however, will be clear following the arrival of the post mortem report, and submission of details by the committee, the minister said.

“Visited the elephants’ death incident spot near Bamuni Pahar, Nagaon to assess on-the-spot scenario and pay my tributes to the Natures precious assets,” he tweeted.

Principal Chief Conservator of Forest Amit Sahay, on his part, said the carcasses were found lying in two groups – fourteen on top of the hill and four at the bottom.

As the area, where the elephants died, is remote and not easily accessible, the forest team could reach the spot, which is close to the Karbi Anglong district, only on Thursday afternoon, he added.

Assam: Minor scuffle between two in football match ends up in a murder

Assam extends COVID-19 curfew till June 22 with some relaxations