The Archaeological Survey of India (ASI) has restored 6 monuments outside the country and there are proposals for 10 more structures to be conserved by it in the new future. 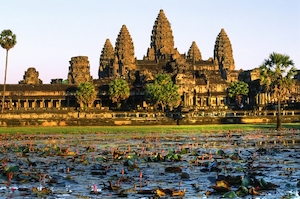 New Delhi: The Archaeological Survey of India (ASI) has been steadily expanding it’s external presence by conducting restoration work in other countries, till now it has restored 6 monuments outside the country and there are proposals for 10 more structures to conserved by it in the new future.

Angkor Wat temple complex in Cambodia, was the first large scale external assignment of the ASI, in 2002 the then Prime Minister Atal Bihari Vajpayee during his visit to Cambodia had offered the Royal Govt of Cambodia the servicesof GOI for the complex’s restoration. ASI started work on the site in 2004.

Sharma explained the challenge associated with restoration of the Ankor Vat, which is considered the largest religious monument in the world “When we went there this temple was completely engulfed by a forest, these structures were completely taken over by the roots. Initially we did not do anything except for emergency consolidation, we undertook a very comprehensive documentation of this temple and from 2007 onwards we started conservation work. Conventional wisdom says that vegetation is the enemy of the building however UNESCO posed a challenge to us, they said here is an instance where there is a symbiotic relationship between the trees and the structure and they have been co-existing for several centuries they asked us to adopt a measure which respects that symbiotic relationship and provides a structural solution accordingly. We had to use the services of the forest research institute Dehradun, IIT Madras- for them to study the nature of the trees, the nature of the roots, the lifespan of the trees-and the structural solutions of how to support this whole thing. First three years went into documentation, stone by stone, layer by layer documentation was done thereafter the stones were put back, the foundation was strengthened. 95% of the original stone which was lying over there were used – not only were they put back but they were put back to the same location from where they fell.”

He said that ASI teams working abroad are very small and one of it’s chief aim is capacity building of the locals “ASI has very small teams working abroad but several locals are working with them, be it masons, stone carvers, architects, forest officials etc- they are working with us. One of our major aims is capacity building of the local population.”

He elaborated that apart from Ankor Vat, the Bagan archaeological area in Myanmar and My Son Temple Complex in Vietnam are some of the major works that have been undertaken by the ASI.

“In Myanmar we have restored the Ananda temple, which is the second largest temple in the Bagan archaeological area, we are also involved in the conservation of the murals and paintings inside these structures. We are also working to restore the My Son Temple Complex in Vietnam- this was completely destroyed by the US carpet bombing during the Vietnam war, here the challenge was different as here the restoration of bricks had to be done, as compared to large stones, this was much tougher, as bricks are much more fragile. There was no mortar, these were stuck by glue extracted from a particular plant.”

Sharma emphasized that such conservation efforts abroad help in building good will for India “locals have a lot of sentiment towards these monuments, these became world heritage recently, for us they are monuments but for them they are temples, a revered place. They are pleased with the restoration of these monuments.”

He gave details of some of the future projects proposed for the ASI “Another site we are working on is the Friday mosque in Male, this is a site proposed for UNESCO World heritage, apart from this Uzbekistan has requested India to help restore 2 Buddhist structures- Fayaz Tepa and Kara Tepa.”