All eyes on Meghalaya Speaker over Congress MLAs merging with Trinamool

Senior Congress legislator Mazel Ampareen Lyngdoh, however, voiced happiness with the 12 of her former party legislators deserting the Congress. 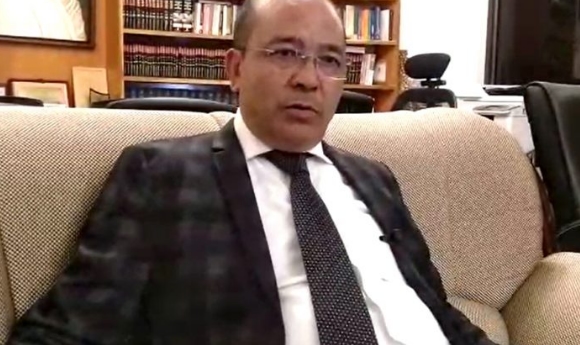 Shillong: All eyes are on Meghalaya Assembly Speaker Metbah Lyngdoh on Thursday as he is expected to take a call on the defection of 12 Congress MLAs into the Trinamool Congress unit in the state and also the appointment of former Chief Minister Mukul Sangma as the Leader of Opposition.

“I have received a letter of merger signed by 12 Congress legislators late Wednesday night. I have not accepted it so far. I am yet to examine it and I will follow the procedures as enshrined in the provisions of the Tenth Schedule,” Lyngdoh told UNI over the phone.

On Wednesday night, 12 of the 17 Congress legislators in the 60-member Meghalaya Assembly submitted a letter of their joining the Trinamool. As it is a two-thirds majority that has defected so anti-defection law will not apply.

If Speaker Lyngdoh recognises the merger, then Trinamool, which had not won a single seat in the 2018 assembly polls in the state, will become the principal opposition party in Meghalaya with Sangma leading the opposition in the House.

Those who signed the letter of the merger include Sangma’s wife Dikkanchi D Shira, his daughter Miani D Shira and his younger brother and former minister Zenith Sangma.

“We will be meeting the Speaker this afternoon to convey to him that the merger of the 12 Congress legislators that has been accepted by the Trinamool president by virtue of having two-third of the strength of the legislature,” Pyngrope told UNI on Thursday.

The split in the opposition Congress comes as a shock to many.

Sangma recently met Congress general secretary KC Venugopal along with Meghalaya Pradesh Congress Committee president Vincent H Pala and other state Congress leaders and unanimously resolved to consolidate all strengths of the party in order to effectively overcome hurdles and challenges faced by the party in the run-up to the assembly polls in 2023.

Pyngrope said that there are many reasons, including the party leadership that had forced them to switch sides.

“There is no leadership at all in the Congress at the Centre.

“In our recent meeting (with Venugopal) we could see there is a total vacuum and it will be difficult for any of us to move ahead when we don’t have proper leadership,” Pyngrope said.

In fact, the rift within the ranks of the Congress party in Meghalaya erupted ever since Pala was appointed as MPCC president in August without consulting Sangma.

Pala candidly said: “Mukul had nothing against him personally but was unhappy with the AICC for the manner of appointment of the MPCC chief.”

Senior Congress legislator Mazel Ampareen Lyngdoh, however, voiced happiness with the 12 of her former party legislators deserting the Congress.

“I am happy that finally, this bickering from within is seeing its climax, and as we rebuild the party, we will reinforce its ideologies in spirit, we will fight for the issues that challenge the interest of the people of Meghalaya,” Ampareen told UNI.

When asked about the reasons behind the desertion of her party legislators, Ampareen, who is also the MPCC Working President, said: “Power mongering appears central to this clash of interest within the Congress.

“Maybe money or it being closer to election 2023 could also be a major factor.”