Even if Pakistan win their matches against South Africa and Bangladesh on November 3 and 6, respectively, their chances to qualify will depend on other teams because six points will not be enough to cruise through. 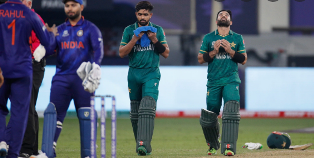 Bengaluru: With South Africa climbing the top of the points table after defeating India at Perth, Pakistan’s chances of qualifying in the semifinals of the ongoing T20 World Cup in Australia are thin.

Two defeats in the nail-biting final ball matches against India and Zimbabwe had left Pakistan in a precarious position, needing something special to qualify for the knockout stage. But, their chances have taken a massive hit after India’s defeat at the hands of South Africa.

Even if Pakistan win their matches against South Africa and Bangladesh on November 3 and 6, respectively, their chances to qualify will depend on other teams because six points will not be enough to cruise through.

Pakistan’s chances although are not mathematically impossible. Net run rate could yet be a factor, so a big margin of victory in at least one of the remaining games wouldn’t hurt.

However, the happiest among the former greats would be Roger Binny, the current BCCI President, if Pakistan does not make it to the semifinals. Binny had said this to reporters after KSCA felicitated him for becoming the second BCCI President from Karnataka.

South Africa’s win over India catapulted the Proteas to the top of the points table with 5 points in Group 2 of the Super 12 contest. India and Bangladesh have 4 points each and are in a hot chase for knockout-stage qualification.

However, Wednesday’s match is even more important, despite India having an edge over Bangladesh in terms of a net run rate of +0.844.

A victory for Bangladesh will leave the group wide open, putting them two points ahead of India with just one game to play and potentially opening a path for India’s semi-final spot to be snatched from them in the last round of matches.

Should India win, then they will have more than a foot in the semifinals, with Zimbabwe awaiting them in Sunday’s fifth and final group game.

Zimbabwe needs something special to finish in the top two from here after their dramatic loss to Bangladesh, before pulling off a stunning win against Pakistan.

South Africa’s NRR of +2.772, created by the crushing 104-run win over Bangladesh, means they are now clear favorites to qualify in the group.