Who will be the next CM of Manipur?

They even wondered whether it’s a media fixing or media creation. 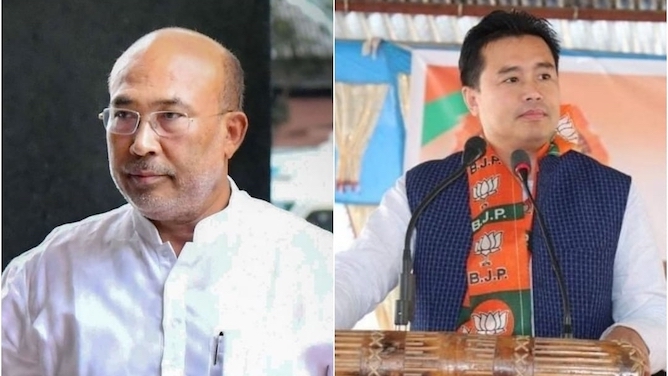 Imphal: Despite the noises which have been circulating in various Delhi-based media and local TV channels, there is no decision yet by the BJP high command who will be next chief minister of Manipur, a highly placed source informed The North East Affairs here on Wednesday.

At present, caretaker Chief Minister N Biren Singh and senior minister Thongam Biswajit are the two possible contenders for the CM Post. However, many media houses both in Imphal and Delhi have jumped to the conclusion that N Biren Singh will be next Chief Minister of Manipur, more so after he paid a courtesy call to Prime Minister Narendra Modi and senior party leaders including Amit Shah, Nitin Gadkari and others, which is beyond party’s democratic practices and ethics, they feel.

They even wondered whether it’s a media fixing or media creation.

Source pointed out that the BJP Parliamentary Board has already appointed senior party leaders and Union Ministers Nirmala Sitharaman and Kiren Rijiju as Central Observer and Co-Observer for the election of the Leader of the Legislative Party of BJP in Manipur. Both the Observers will discuss with all the elected BJP MLAs in a democratic manner. The procedure is taken up with the full knowledge of party leadership and Parliamentary Board of the party. There is no report of any changes in the procedure, the source added.
Once the Observers return to Delhi, the Central leadership will decide who will be the next CM of the state.

It’s also urged not to play with the sentiment of the elected MLAs and instead follow the prevailing procedure of the party to elect the Leader of Legislative Party to lead the next government in Manipur.

On Wednesday, N Biren Singh called on the Prime Minister a day after, he, Biswajit and State BJP chief Adhikarimayum Sharda Devi took a chartered flight to the national capital after being summoned by the party’s central leadership ahead of the selection of the next Chief Minister.

It may be noted that caretaker Chief Minister N Biren Singh, after his meeting with BJP national president JP Nadda in Delhi on Tuesday said that the new government in the state is likely to be formed after Holi, which starts on Friday.

On who would be next Chief Minister, Biren said, “I don’t know. The party has appointed observers who will visit Manipur and after the formalities, the parliamentary board will announce the CM’s name.”