Dhankhar said the new education policy of the central government has become the game changer of human resource development of the country and achieved a milestone where Tripura has no exception. 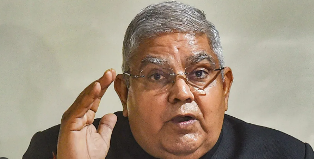 Agartala: Vice President Jagdeep Dhankhar on Tuesday during his maiden visit to the northeast addressed the students and faculties of the 75-year-old historic Maharaja Bir Bikram College here and appreciated the development of Tripura.

Dhankhar said the new education policy of the central government has become the game changer of human resource development of the country and achieved a milestone where Tripura has no exception.

The growth of the education sector over the last few years in the state is simply impressive and hopefully, Tripura will achieve its target, he said.

“Education is one of the important vehicles of development and Prime Minister Narendra Modi has attached the highest priority to this. Under the leadership of the Chief Minister here, Tripura is also progressing in the same direction, which is visible and recorded,” Dhankhar stated.

He mentioned three things about Tripura that have impressed him – the warmth of happiness, ongoing construction activities, and God-gifted natural beauty, which according to the vice president would drive the development of the state, and Tripura’s contribution to the national growth is well-recognized.

“I am delighted to see the change in Tripura and believe the development would be historic. I appeal to everybody in the country to spare some time in the beautiful land of Tripura,” the Vice President attributed, adding that Tripura is the land of vibrant culture.

Appreciating the Prime Minister, Dhankhar said only a few months ago India emerged as the fifth-largest economy in the world and has been working on a mission to become the third-largest global economy by the end of the decade.

The country has also witnessed inclusive growth overcoming the regional disparity in terms of infrastructure development, he pointed out.

The Look of East Policy of the government has contributed a lot to the development of the region and now it’s beyond the frontiers of the country. The economic ecosystem of the country has changed now, blended with the education policy that is linked with start-ups and entrepreneurship where every individual has the opportunity of sheer commitment and dedication to the country, Dhankhar added.

Highlighting the development of Tripura Chief Minister Dr Manik Saha said that not only in the education sector, but the state has also got immense support from the centre by which new national highways, airports, railways, and transboundary surface communication infrastructure is coming up to make Tripura the gateway of South East Asia.

The Vice President along with his wife arrived here in the morning on an Air Force special flight and was welcomed by Chief Minister Dr Saha and Deputy Chief Minister Jishnu Dev Varma along with the top officials of the government. He was accorded guard of honour by Tripura police at MBB airport.

Thereafter, Dhankhar went to Udaipur by chopper to offer puja to Mata Tripureswari, one of the 51 Shakti pith of the world.

After returning, he addressed and interacted with the students and faculties of MBB College and University before leaving for Delhi in the afternoon.